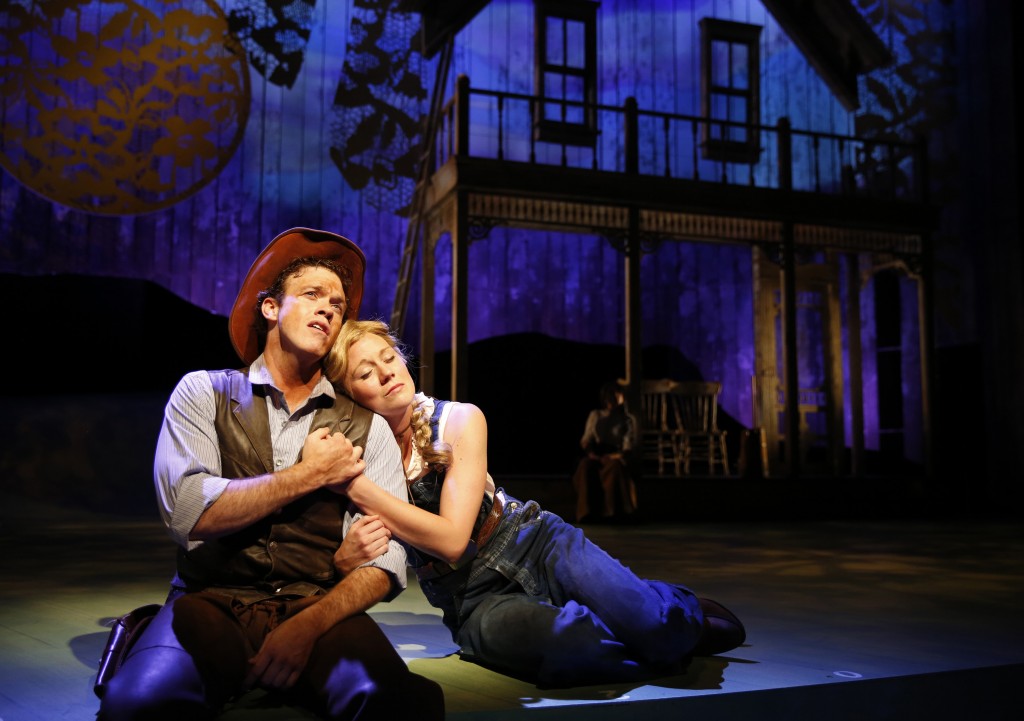 Paramount Theatre opens their Broadway Series with a rousing “Oklahoma!” as impressive as last season’s production of “Les Misérables.” It’s not just that Paramount Theatre’s Broadway Series is consistently good, it is that they are consistently much better than they have to be. Because honestly, they could probably sell a lot of tickets even without an eighteen-piece orchestra (or, for that matter, so many accomplished actors). A smaller, less lavishly produced musical would do just fine. Artistic director/director Jim Corti, however, chose not to settle and the result is a riveting and fresh-feeling production of the Rodgers and Hammerstein classic.

Indeed, much of the production is light and breezy with a set that includes transparent homes which effectively accent the wide-open possibilities of the Oklahoma territory. The big numbers are also done exceptionally well, with Katie Spelman’s choreography a good complement to the rousing orchestra and singers. At the same time, Corti does not shy away from the darker elements of the material, with farmhand Jud Fry (Peter Saide in a very menacing, very physical role) portrayed as a sinister stalker looming in the shadows. This is a great contrast to the warm glow of Curly (Colte Julian) and Laurey’s (Allison Sill) blossoming romance, with both lead actors exuding the confidence and musical chops necessary to keep the audience engaged.

Comprising the other love triangle are Lillie Cummings (as Ado Annie Carnes or “the girl who can’t say no”), Kareem Bandealy (a Persian peddler who does not want to marry Ado) and Carl Draper (a dim witted cowboy who does). Cummings is the standout performance that binds the three together and keeps the laughs coming.

The drive to Aurora may not be for everyone. But those that do come sweepin’ down the plain (or at least down Interstate 88) will find this performance considerably better than just O.K. (Noel Schecter)