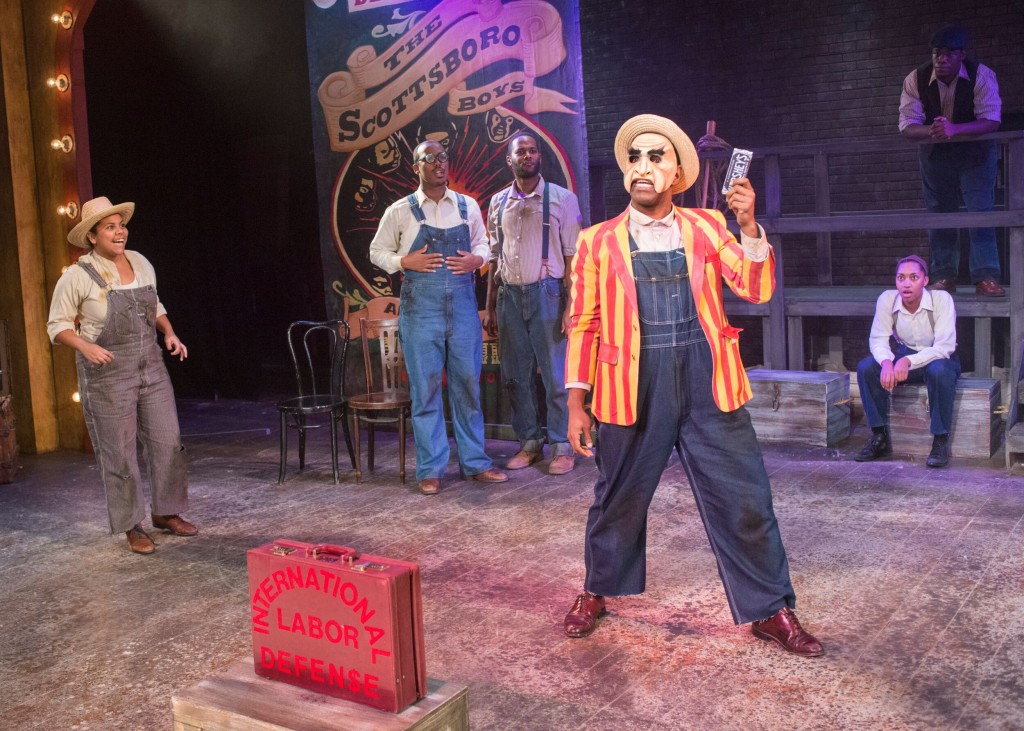 There are a lot of things about “Direct from Death Row: The Scottsboro Boys (An Evening of Vaudeville and Sorrow)” that are huge in scope, aside from its title. The play covers the historic effects of one of the most disturbing legal roller coasters of the twentieth century. And it deals with the myriad personal repercussions that the trials had on nine young black men who were framed for a rape that not only did they not do, but that didn’t even occur.

Staged as if the audience is viewing a very casual performance in a cluttered vaudeville house, the nine men involved relate the tale of their tormented journey, which started out riding the rail and quickly landed them in jail. Some parts are done as monologues about one person’s experience. Others are arguments within the main core group. And other scenes are done in masks that amount to white-face portrayals of the people in power who either tried to crush or assist the Scottsboro Boys (as the nine came to be known publicly).

The masked scenes are often disturbing, as they dehumanize the portrayed characters in a similar way to how whites have often dehumanized blacks throughout our country’s history. The mask work and physical acting methods employed bring out how much of a big top atmosphere encompassed this entire piece of history, all the while clarifying just who really were the clowns within that circus.

The entire cast do a remarkable job in their main roles, as well as their adopted, masked personae. Kevin Patterson’s portrayal of the primary narrator of the show, Haywood Patterson, is edgy and dangerous throughout. He keeps us from letting down our emotional guard despite the laughter that flows due to the sharp writing in Mark Stein’s script. Breon Arzell shines brightly during his scenes as Joe Brodsky (a Communist Party leader who tried to help the nine men). Arzell’s skill in dell’arte-style mask work is evident, and his movement work is a thing of beauty.