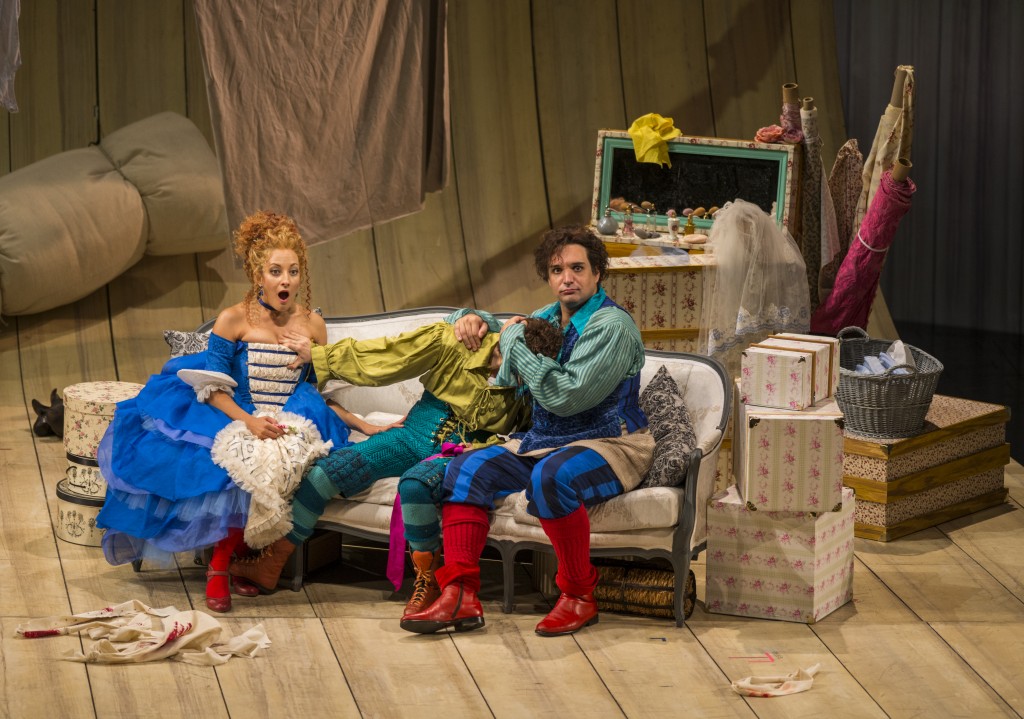 With a splash of commedia dell’arte, a spoonful of Restoration comedy, and pounds of clowning, director Barbara Gaines has exploded the up-and-downstairs Mozartian confection of two marriages hanging in a balance of power, and “Le nozze di Figaro” may never be the same. Lyric Opera of Chicago opens its 2015/16 season with one of opera-goers’ most beloved chestnuts; Gaines has roasted it, and served it up for the masses.

Usually prepared with great reverence, with its stunning, ear-familiar arias, ensembles unrivaled for their delightful intricacy, and a question of love for the ages, it is no wonder that many production stylists have feared to mess with it; the sublime music is enough. But Chicago Shakespeare founder Gaines has her players rushing about in sheer glee, physicalizing emotions, grabbing bosoms, to the point that they cannot merely sing; they must live every moment. Hunks of the opera are almost spoken, for loss of self-conscious breath, and the effect is electric.

The entire cast throws themselves whole-heartedly into Gaines’ whirlwind world. Particularly successful at combining all the elements of stagecraft with operatic grace is Adam Plachetka; his Figaro is boisterous of voice, movement and soul. Rachel Frenkel’s Cherubino is a completely believable boy, warmly sung. (With Chicago Opera Theater’s “Lucio Silla” on the boards, right now there are three women in Chicago successfully playing opera boys while singing beautifully, a gift of glorious operatic-transvestism.) Keith Jameson takes Basilio past the usual nasal slime, singing it prettily, and fetching fey as a blond Andy Warhol.

If Amanda Majeski’s Countess fumbled the first aria a bit when I saw it, which soprano doesn’t? (Ms. Fleming aside.) She put it out of everyone but the most belligerent critic’s remembrance with the second, spinning glorious, deep ache. If conductor Henrik Nánási didn’t always hold the troops together while they raced about, what of that? They were busy storming the barricades of preconception.

Who is the audience for this fast, fresh, farcical, theater-meets-opera, hot mess? Everyone. (Aaron Hunt)