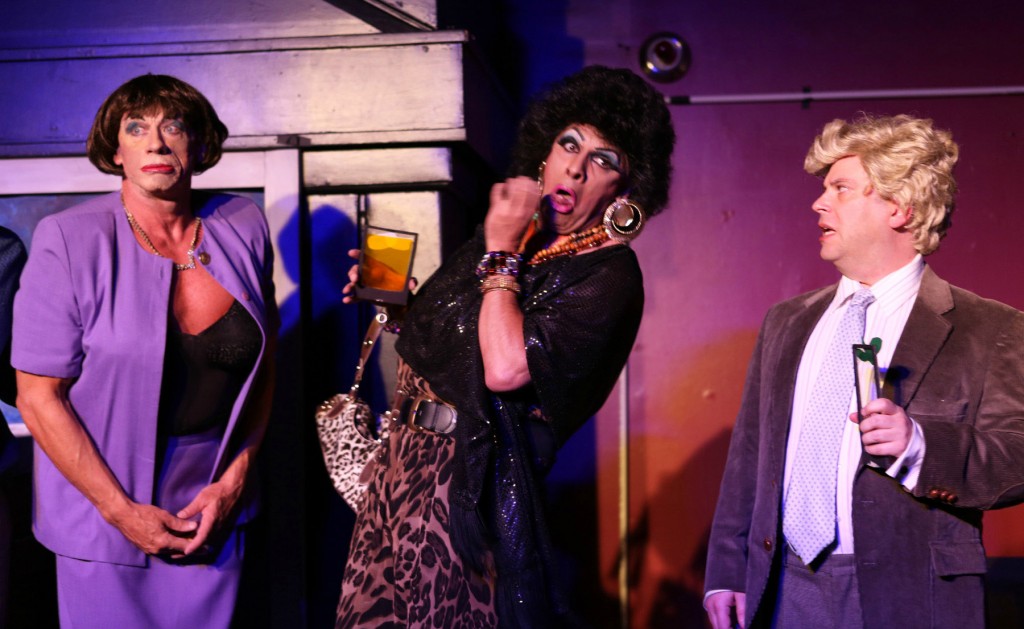 When you review a show, you have to take into account what the producing company is shooting for. “Scream, Queen, Scream!”—three vignettes by playwright David Cerda, is this year’s Halloween offering from Hell in a Handbag Productions. The troupe doesn’t take themselves too seriously, and we ought to embrace that. After all, their own materials declare them a “camp and parody theater.” So, one shouldn’t expect high art from the production. Instead, expect a lot of silly fun.

Fans of late-night-horror programming will notice the hostess, Dragula (John Cardone), is cut from the same cloth as Elvira and others of her ilk. Cardone’s delivery of dry sarcastic punchlines holds this show together with a special brand of wickedness.

In between Cardone’s segments are short plays that riff on the horror flicks of a bygone era. Kicking off the evening is a play that takes place in a corporate office, where life is generally boring until Mary Satana (Rachel Hadlock) shows up to wreak havoc with the assistance of a possessed photocopier.

The middle child in this family of campy horror sketches is the most promising, largely because it is a sendup of a segment of the film “Creepshow” (much of the production’s EC Comics motif is borrowed from that film’s publicity materials, too). This piece features David Cerda as an overbearing hag of a wife, whose husband fantasizes about offing her in various ways, only to eventually succeed with help from an unusual source.

The third piece is an homage to films starring Bette Davis and Joan Crawford. It is a very creatively staged piece that involves Ed Jones (and a number of body doubles) portraying a set of twin girls. Despite this piece going on a bit too long, it is still entertaining to watch the tricks used to make the twin thing work.

Throw all of that together with a good deal of clever puppetry and a spot on Kim Davis impersonation, and you get an evening of ribald comedy and a pretty good drag show to boot. (Christopher Kidder-Mostrom)

Hell in a Handbag Productions at Mary’s Attic, 5400 North Clark, handbagproductions.org, $22-$40. Through October 31.