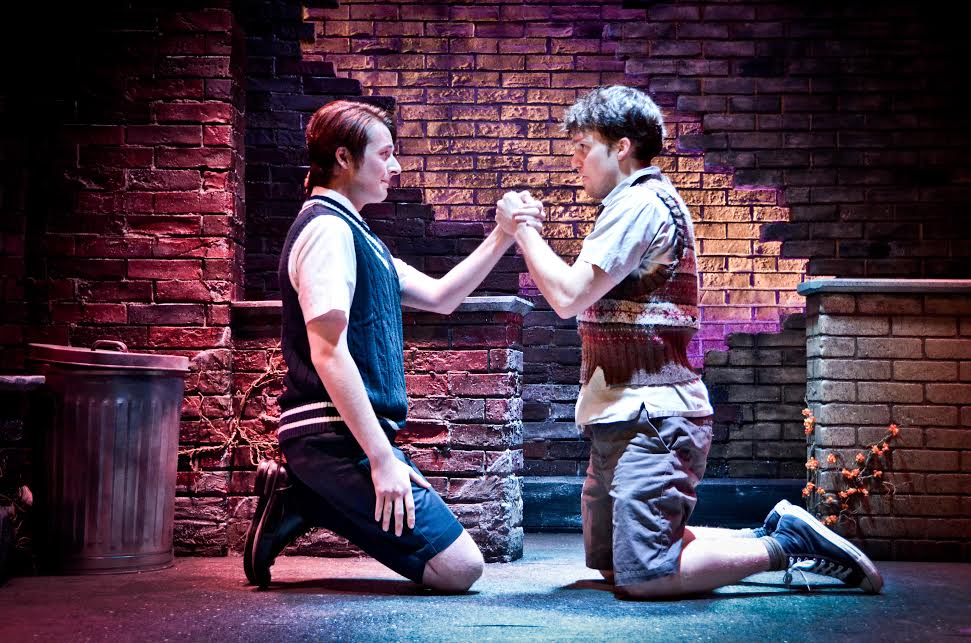 Willy Russell, playwright of “Educating Rita” and “Shirley Valentine,” wrote the book, music and lyrics for the folk cantata “Blood Brothers,” which ran for twenty-four years in the West End. At one point during its two years on Broadway, Petula Clark made her Broadway debut as a financially struggling mother who gives up one of her fraternal twin boys to a wealthy family; half-brothers David and Shaun Cassidy played the sons, the trio creating a media firestorm. While the first chords leave little doubt that the nature-vs.-nurture plot ends in tragedy, Russell’s gifts for character-sketching, storytelling and the power ballad, keep teeth on edge. Just so, and in spades, with Theo Ubique’s 2015/16 season-opener.

In a room so intimate that one’s sense of personal space has to be suspended with their disbelief, director Fred Anzevino, musical director Jeremy Ramey, and choreographer Maggie Portman create an atmosphere of gritty pathos. Every performance rings honest, Ramey pulls an orchestra out of the keyboard, and the players appear and disappear magically, suddenly at your elbow, then dissolved into dusty mist; they are us, and we are complicit. With the expert dialect coaching of Adam Goldstein, Bill Morey’s picture-perfect costumes and Maya Michele Fein’s ability to create headless-horseman lighting in a Cracker Jack box, we are transported to another place and time that bleeds immediacy.

Kyrie Anderson’s performance as the mother is definitive; her voice is as warm and true as her spirit is conflicted. Part “Our Town”’s Stage Manager and part El Gallo, Jordan Phelps’ superb Narrator guides us through the tale; Phelps keeps just the right objective, emotional distance, while spinning heart-wrenching vocals. As the twins, Chicago-newcomer Charlie Mann and Cody Jolly carry us into that secret world of twindom, completely believable from estranged childhood, through confused adolescence, to the adult denouement; Mann’s lilting tenor scorches.

Remember Theo Ubique’s 2012 “Light in the Piazza?” When a ticket couldn’t be had for love nor money? Get your ticket for “Blood Brothers” immediately. (Aaron Hunt)