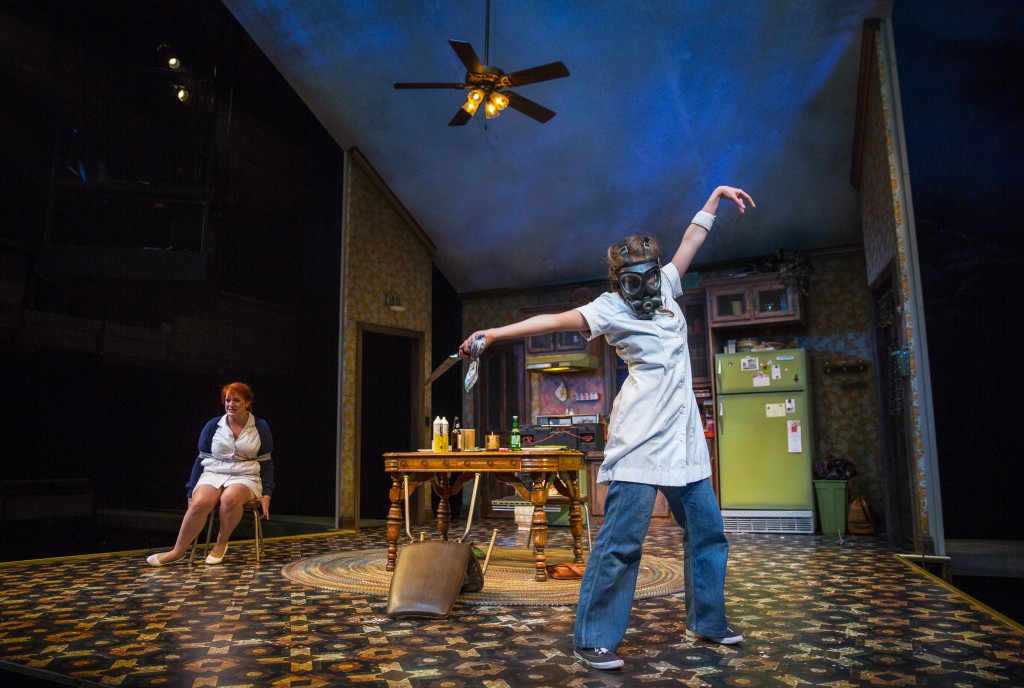 Horror is a mighty genre, stealing you away from the present like no other genre can, activating the primal instincts that follow fear and focusing your attentions like a laser on that which poses the threat. It can be a real pleasure to be filled with dread by circumstances that aren’t your own, to be relieved of your own droning anxieties as they make room, for just a moment, to focus on someone else’s nightmares. Unfortunately, Charise Castro Smith’s “Feathers and Teeth,” the Goodman’s first-ever attempt at horror, is a little more hokey than horrific.

This isn’t to say that the show isn’t hilarious and entertaining, but I was disappointed not to feel anything as powerful as fear. Despite this, the audience is kept on the edge of their seats by swift and nearly seamless pacing, accompanied by lots of loud Pink Floyd and Led Zeppelin, placing you squarely in the 1970s.

The strange Hamlet-esque storyline also draws the audience in with its many twists and, particularly, with the novelty of seeing the stepfather/son struggle reimagined as a stepmother/daughter struggle. Is thirteen-year-old Chris (Olivia Cygan) just hormonal, raging against her father’s new fiancée (Christina Hall) like any normal teenager would two months after their mother’s death? Or are Chris’ accusations that Carol has murdered her mother well-founded? Cygan and Hall do a superb job of crafting Chris and Carol (respectively), managing their mania (in Chris’ case) and their flippant ditzy-ness (in Carol’s case) so that the audience isn’t sure of Carol’s evilness or Chris’ sanity until the very end of the show. Chris’ dopey father, Arthur (Eric Slater), and her dorky neighbor, Hugo (Jordan Brodess), are the perfect foils to these cunning ladies.

Meanwhile, there is a huge cast-iron pot rattling around on stage, filled with hungry, feathered, toothy critters, signifying that something is rotten in this Midwestern Denmark. And yet, this strange element fails to provoke any fear, in part because there is just too much going on, such as the Foley artist and the shadow puppetry that I have neglected to mention till now. These many elements drain the audience’s focus, entirely diminishing the horror throughout the production. (Joy Miller)