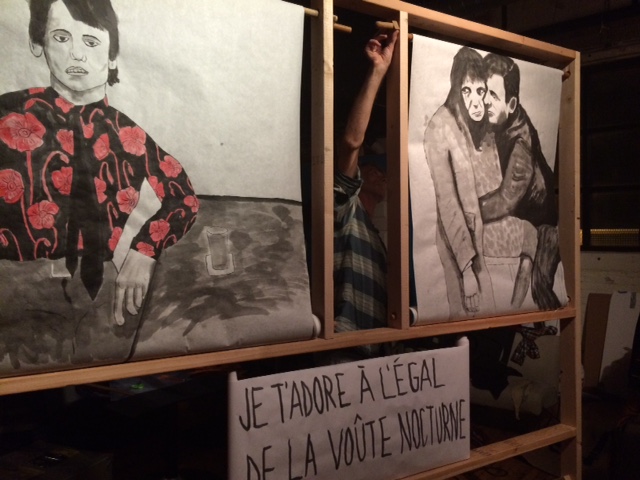 Cantastoria is not a terribly familiar theatrical form, but it is a legitimate one, and one that is appropriately suited to bringing the poetry of Charles Baudelaire to those of us who are bombarded daily with memes on Facebook. On the surface, “Delicious Night: Baudelaire in a Box, Episode 8” seems like it ought not to be called a theatrical production, but rather a rock concert. An ensemble of six musicians (four of who are the evening’s composers) play songs that set the French poet’s words to music. All the while Dave Buchen’s inspired artwork slowly slides past on hand-cranked rolls of white paper.

The focus here is on the words and the images that they create, both on paper and within the imagination. All the artwork and the songs are selected from Baudelaire’s masterwork, “Les Fleurs du Mal” (“The Flowers of Evil”). Each piece has merit, though some stand out above the rest. Two named after animals are quite pleasing. “The Dancing Serpent,” sung by Whitney Johnson, has a more new-age feel than some of the other pieces, its ephemeral beauty capturing the lyrics’ dreamy, sexual reverie. “The Cat,” sung by Monica Boubou, is closer to a catchy pop song, and is a suitable ode to an “amiable beast.”

The translations of the poems are done by the four composers. Boubou and Johnson seemed to tackle the more whimsical pieces, while Bobby Conn and Azita Youssefi tackle the edgier and harder rocking selections.

Cantastoria, with its combination of musical storytelling and static images, reached its Western heyday back in the nineteenth century, coinciding with the rise of the Romanticism of Baudelaire’s writings. Today, the form is generally used in more avant-garde works, which, it must be said, this production is. It is simultaneously experimentally adventurous and nostalgic. It is a show that calls upon past works and past methods to create a wholly new experience that grabs our current concept of theater and shakes it up a bit. (Christopher Kidder-Mostrom)