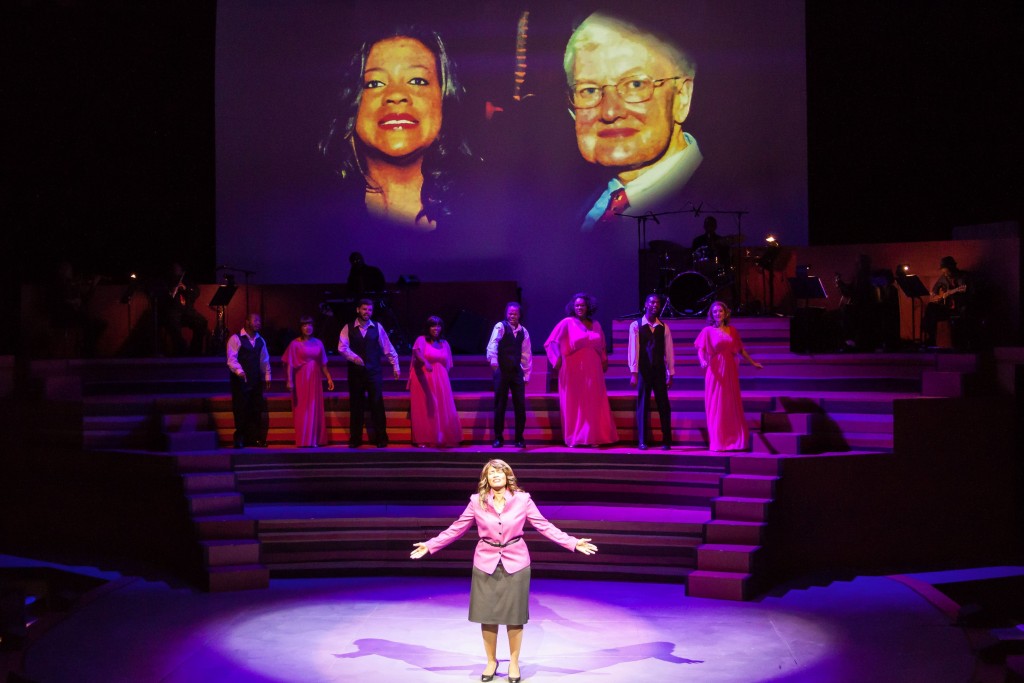 With a title like “The Black White Love Play,” it’s not surprising that a song entitled “No Matter What Race” is featured, gets a reprise, and also gets sung during the bows. What is slightly more unexpected is that a play about the love shared by Chicago’s own Roger Ebert and his wife Chaz can be used as the framework for a jukebox musical revue.

The story is told directly to the audience through the perspective of Chaz Ebert (Rashada Dawan) in a series of vignettes and monologues that narrate the journey from her first meeting with Roger (Kevin Pollack) through his death in 2013. Dawan does an admirable job of carrying the plot on her shoulders. Pollack captures the essence of Ebert in his mannerisms and the sound of his voice. But their story isn’t really a story, so much as a series of events. The play has more in common with an Up With People performance or show choir concert than a dramatic work.

A Greek Chorus of eight singers is the backbone of this production. They provide the majority of the action on stage, whether that be dancing, reciting of didactic poetry, or creating tableaus against which the scenes involving Dawan and Pollack are played. Their songs are generally well executed. The band is very strong, though the bass guitar was mixed hotter than the rest of the group the night I attended.

This is a format that Black Ensemble Theater can do in their sleep. Unfortunately, that is sort of how this show feels. It is generally well done, but not as strong or sharp as previous efforts, which is frustrating given that the topic of the relationship between these two remarkable people is so much more intriguing than an assemblage of pop ballads by Lionel Richie, Rod Stewart and the Bee Gees (though, Jhardon Dishon Milton’s falsetto lead on “Too Much Heaven” may outshine the Gibb brothers’ original).

This production is a missed opportunity to tell an epic love tale. Instead we get a bare-bones outline of a story with a concert of throwback hits. (Christopher Kidder-Mostrom)