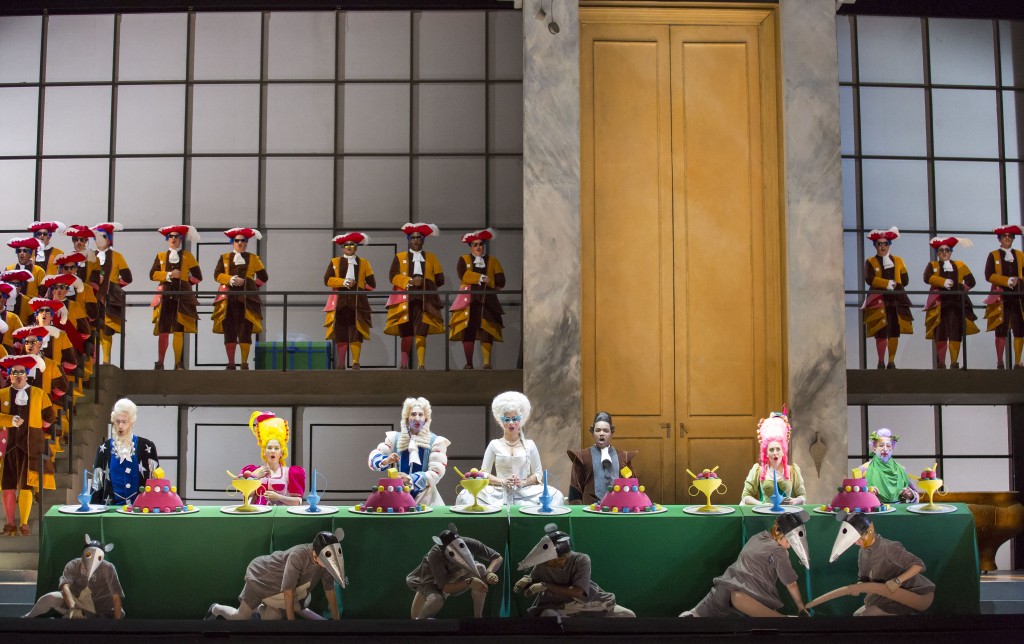 Last Sunday’s afternoon matinee of Gioachino Rossini’s “Cinderella” (“La Cenerentola”) at the Lyric Opera set me musing. Why would Lyric director Anthony Freud schedule a romantic feminist dramma giocoso, a chamber opera, in his cavernous 3,563-seat house? My answer: Freud aimed at the eight-to-twelve-year-old North Shore demographic, privileged kids whose parents think nothing of plunking down $950 for four main-floor seats.

This production, I admit, charmed its target audience. They loved the six-person corps de ballet as obedient household mice, Cinderella’s loving helpers who mind-read her slightest wish. They were fascinated by Prince Ramiro’s retinue, male chorus dressed Swiss Guards-like à la Peter Sellars, dazzling us with deep reds and oranges and yellows. They gave this burlesque a long, loud standing ovation at the end.

Only your critic sat stony-faced, arms crossed, disdaining the happiness and enthusiasm engulfing him. Fortified by vast historical knowledge and unfailing aesthetic judgment, he knew that what he had just seen bore but faint resemblance to Rossini’s opera. And Rossini’s intentions were clear: despite his cynicism, his light-heartedness and his inborn impulse to cock a snook at pretentious respectability, Rossini meant to teach a lesson with “Cenerentola,” which is why he junked the fairy godmother, and forbade his librettist to mention her.

No, Cinderella must floor her man, compel adoration, by her strength of character and her feminist resolve to do without love rather than compromise herself in the least particular. Mary Wollstonecraft could not have drawn a Cinderella of greater granitic self-respect and iron resolve.

I do wish Sir Andrew Davis had not drowned out the lower registers of the delightful Cinderella (Isabel Leonard), Tisbe (Annie Rosen) and Clorinda (Diana Newman) in act one. I wish Lawrence Brownlee had willed more character and passion into his perfect lyric tenor voice for Prince Ramiro. I wanted more of Alidoro (Christian Van Horn) and Dandini (Vito Priante), who regrettably towered five inches over Brownlee’s Ramiro. I thought Don Magnifico (Alessandro Corbelli) lacked the stature and the stupid arrogance of Rossini’s creation.

And yet the adoring target audience compels me to say: forget la música, forego frugality, and take your ten-year-old to see this. (Bill Sweetland)