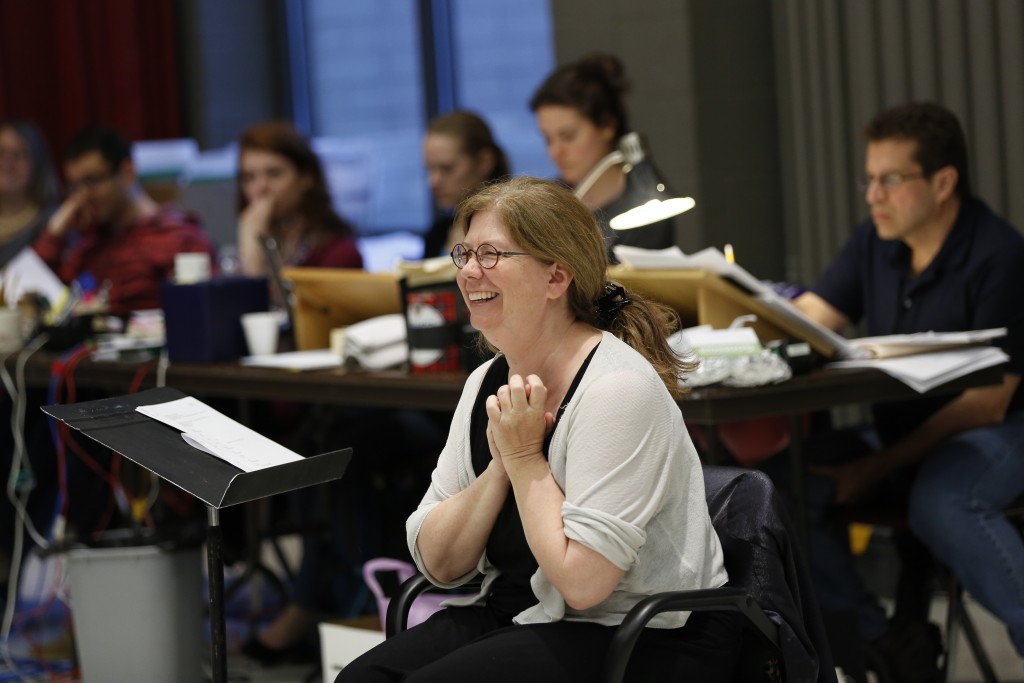 Robert Louis Stevenson’s novel “Treasure Island” is so ubiquitous in the sphere of popular culture that it’s possible to feel as though you’ve read it without ever having actually laid hands on it. The tale of pirates and buried treasure stands as one of the great foundational texts of the last 200 years. Since its publication in 1883, the novel has developed an archetypal reputation, one that has drawn attention from artists and thinkers of all disciplines. It has also proved a surprisingly malleable narrative, appearing in film, radio and theater versions.

With its exotic locations, full-blooded action and larger-than-life personalities, “Treasure Island” presents plenty of challenges for the stage. Yet it was these very challenges that first drew Mary Zimmerman to the story. After picking it up two summers ago, Zimmerman knew immediately that she wanted to adapt it. “I like to stage the impossible,” she tells me during a break in the production’s tech rehearsal. “Theater works by metaphor. You have to bring the world into this black box.”

In this case, the black box in question is Lookingglass, a theater company nationally renowned for their imaginative interpretation of both new and old works alike.

No stranger to stories of epic scope that require minute attention to detail, Zimmerman has taken on “Arabian Nights,” the myths of Greece and Rome, the poetry of Ovid, and the moral misadventures of Voltaire. Zimmerman doesn’t let logistics stand in the way of her desire to bring classic literature to life on stage.

“Things written for the stage are very mindful of the economics. They are written consciously. Books are not subject to anything.” To hear her talk about theater, you begin to picture Zimmerman as the perennial outsider. According to her, it is in literature that she locates her muse. 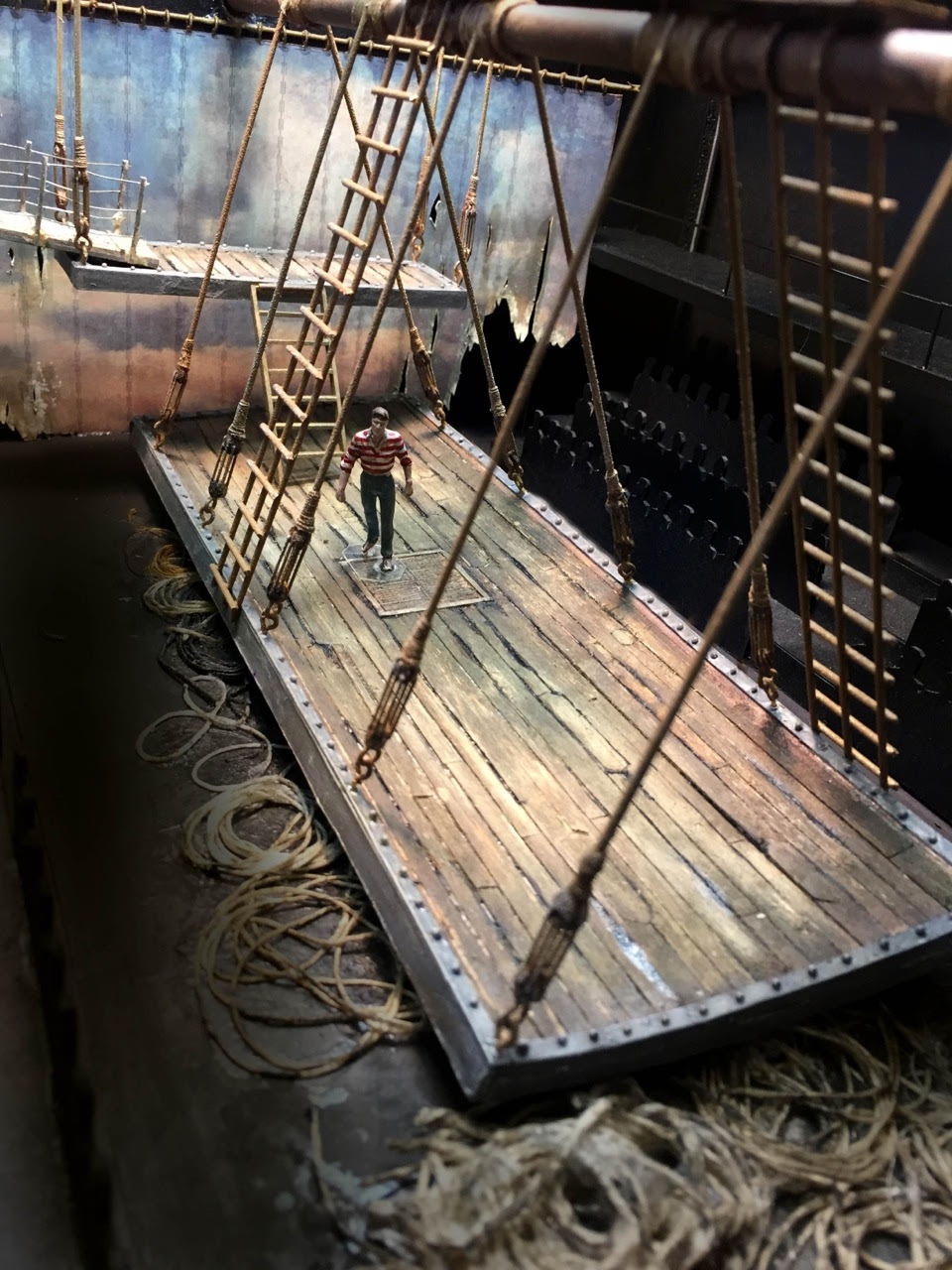 “Treasure Island” represents a departure for the Tony Award-winning writer-director, who is better known for working within the relative flexibility of oral storytelling. She refers to Stevenson as being “very contemporary,” a description only an artist who deals almost exclusively in texts from previous millennia could possibly apply to a nineteenth-century author in a city.

Originally written in serial format, Stevenson’s novel has a rigid shape that, upon initial evaluation, might be more adept for a TV miniseries than the theater. Yet Zimmerman easily locates the properties that translate across mediums. “The characters, the way they speak, how much dialog there is, how fast the action moves,” she rattles off breathlessly. “There’s so much!”

While the novel was intended for young readers, Zimmerman concentrates on bringing out childlike qualities in her actors rather than minimizing some of the more adult aspects of the story. The play is intended for audiences ten years and older, though Zimmerman doesn’t necessarily label it as “fun for the whole family.” Indeed, “Treasure Island” is characterized by danger and punctuated by death. While she has none of her own, Zimmerman does not believe in shielding children from these harsh realities. “The important thing,” she says, “is that the child comes through in the end.”

Despite the framing device—as in “Moby Dick” the narrator here recounts his tale in the past tense—“Treasure Island” still contains a good deal of suspense. That charged emotional state, coupled with the importance of provoking palpable fear in her audience, motivates Zimmerman to construct a work that is both accessible for younger audiences and yet substantial enough for adults. As it stands, her vision is more “Spirited Away” than “Frozen.”

A great believer in the power of stories that are ostensibly constructed for children, Zimmerman has embraced the opportunity to employ child actors. “They are so thrilled to be there. They work so hard and so fast.” Following the success of “The Jungle Book” two years ago at The Goodman, Zimmerman brought on fifteen-year-old John Babbo to play the lead in “Treasure Island.” Babbo joins an all-star cast that includes Lookingglass ensemble members Lawrence E. DiStasi, Philip R. Smith and Andrew White as well as Matt DeCaro, Travis Delgado, Anthony Irons, Steve Pickering, Greg Hirte, Ariel Shafir, L.J. Slavin, Matthew Yee, Kasey Foster and Christopher Donahue.

Having recently wrapped up “Moby Dick,” Foster and Donahue are out at sea again completing a kind of not-quite-intentional dyad of sea adventures at Lookingglass this year.

Zimmerman admits to some initial hesitation when she was asked to follow “Moby Dick” with her vision of “Treasure Island.” Since then she hasn’t looked back and it’s clear that these two plays tread in very different waters. “We’re more earthbound,” she notes. “We’re using poetic metaphor and imagination in the way children do in the backyard.”

A coming-of-age story that is, by and large, initially experienced in youth, Zimmerman connects “Treasure Island” to the legacy of her life’s work by pointing out its potential for breaking down mental age barriers. “The phrase I have in my head is that it’s for the child in the adult and the adult in the child.” With all the tools readily at her disposal, the one that is seemingly most indispensable to Zimmerman is her boundless, childlike imagination.