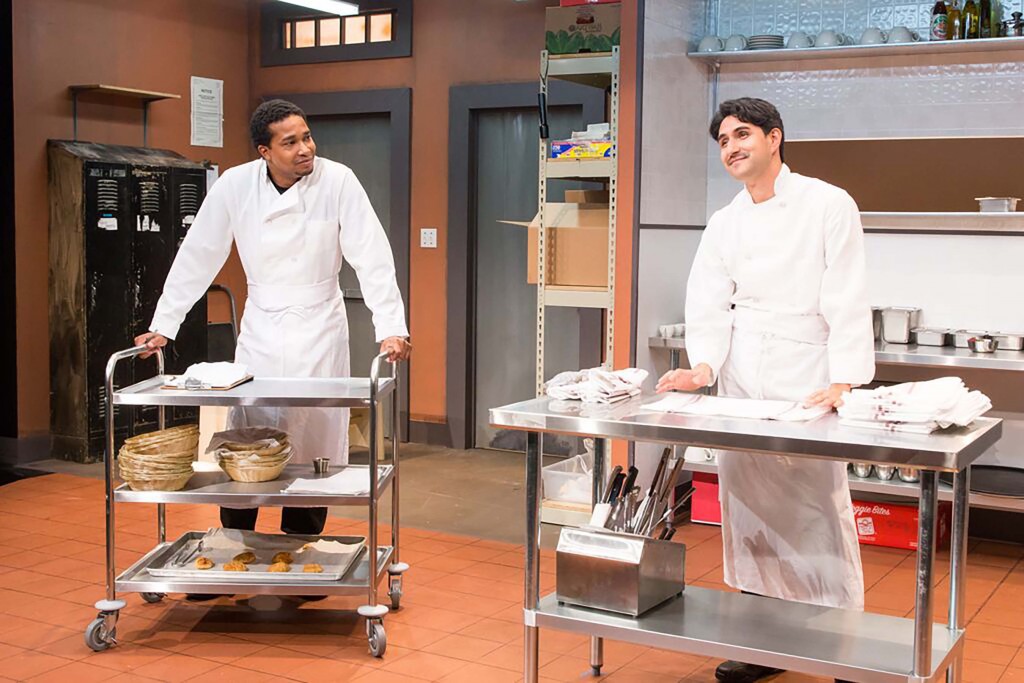 America is known as the Great Melting Pot. It’s a place where people come to have a better life, dream big dreams and do what they can to help them come true. However, it also has the tendency to reach a boiling point when confronted with hot-button issues, like immigration. Opening Teatro Vista’s twenty-fifth anniversary season, “My Mañana Comes” explores this issue through the lives of four busboys in New York, under the direction of Jeff Award-winning actress Sandra Márquez. In the kitchen of an elegant Upper East Side restaurant two American and two immigrant workers share life experience, future goals and hopes for their families. The set, designed by Angela Miller, wonderfully encapsulates what the back of a house should be like. It features easy to clean racks, rolling trays for side work like folding linens or filling breadbaskets, and occasionally squeaky swinging doors to separate the kitchen from the seating area. The set is highlighted by the subtlety in the lighting design by Mike Durst, with particularly nice light cues during the transitions of scenes often emphasizing the close of business and the next day’s opening.

The ensemble cast of Dennis García, Johnathan Nieves, Victor Maraña and Cameron Knight delivers throughout, but especially in scenes between Jorge (Maraña) and Peter (Knight). Their characters have been part of the restaurant for years, taking highs with the lows. Yet, as Jorge has to decide whether to stay in America and try to earn extra wages for his family before returning to his home country, Peter has to decide if it’s worth it to fight for what he believes in or put the good of others before his personal morals. Throughout the show Maraña and Knight wonderfully encapsulate the sacrifices, anger and frustration good people—both immigrants and citizens—are faced with in contemporary American society. (Mary Kroeck)