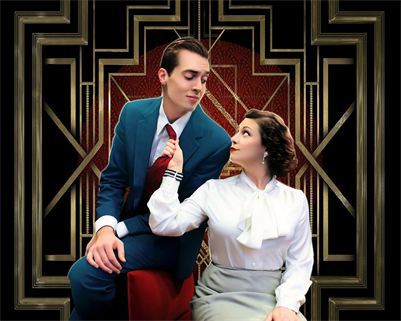 The Dead Writers Theatre Collective focuses on presenting classic pieces in the style and ethos of the period in which they were first produced, and they do so with great verve and success. But they’ve stepped out of their comfort zone with “The Learned Ladies of Park Avenue, ” a freely adapted new translation by David Grimm of Molière’s “Les Femmes Savantes,” with the action transported from 1672 Paris to 1936 Manhattan; this clever farce is none the worse for the update. Grimm keeps the French snap-and-zing, and following Moliére’s expert example, lets the play’s deeper thematic tones creep up on us. Questions of self-concept measured against the mirror held up by others, and the definition and value of education, are just as valid today as in prosperous 1600s France, or in our own Great Depression.

Grimm’s verse is very well crafted, with unexpected, marvelously surprising rhymes. Staged in Stage 773’s cabaret space, with a cocktail-table design, “Learned Ladies” feels just right, as if it’s been staged in a speakeasy. The playing space is long and narrow, with only one entrance/exit point; in lesser hands, the movement could have seemed stilted. But director Michael D. Graham’s choreography appears so natural and effortless, I never noticed challenges for which I expected I would be suspending disbelief.

Graham’s ten-member cast negotiates the razor-sharp repartee and the lengthy monologues with style, and a graceful, grateful zest. Joanna Riopelle is an interesting choice for a matronly harridan, with her soft-spoken voice and ballerina-carriage; yet somehow, this makes her villainy all the more insidious. Bill Chamberlain is terrific as her long-suffering husband, and Mary-Margaret Roberts and Megan Delay offer two daughters so different in every way that they might have been separated at birth. Ken Miller makes a terrific, dithering beau, and Amy Gorelow’s Hungarian cook is one of the most delightfully funny creations I have seen in years.

When the cast uses the appropriate lift at the end of verse lines without punctuation, and uses punctuation falling in the middle of lines as a jump to the following thought, they are at their most successful, and the audience awarded them raucously the night I attended. It wasn’t that they weren’t funny when the verse was unkempt, the audience just has to have a moment to catch up with the lines; they fall behind, and they don’t have a chance to express their joy through laughter. Verse-speaking is a special skill, but worth every moment of preparation because it pays back in spades.

First classics in their own time and style, and now a classic transported. What will Dead Writers Theatre Collective surprise us with next? (Aaron Hunt)