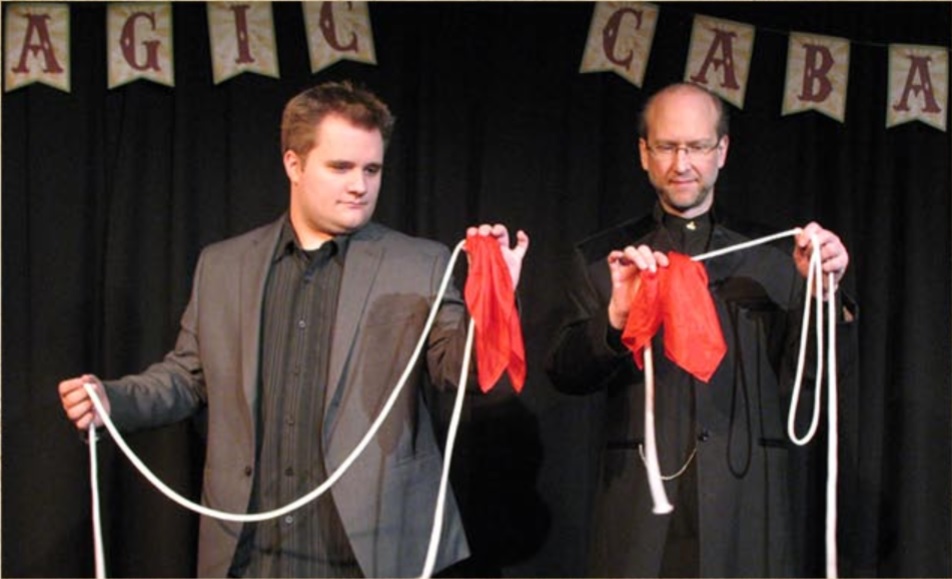 Among the many wonders presented by magicians David Parr and Joe Diamond, the most impressive trick the night I attended was pretty much filling up the house on Wednesday evening, exactly as the Cubs were playing their do-or-die wild card game against the Pirates. While the rest of Lincoln Avenue was glued to sports-bar flat screens, the Magic Cabaret crowd was enjoying an enchanted evening of abracadabra, combining flawless technique with wry humor and relaxed audience interaction.

The show, in residence at the Greenhouse since 2007, is a seminar on every variety of prestidigitation. The brash, bomber-jacketed Diamond was flashier, offering everything from rope and escape tricks (including a nifty Houdini-inspired bit with thumb cuffs) to an eye-widening spoon-bending demonstration from the Uri Geller mind-over-matter school to a bravura display of mind-reading. The cooler Parr, a scholar of the ancient art of magick, has a more theatrical style, embellishing his illusions with quietly spoken, gently creepy stories about ghostly light bulbs and the world behind the mirror.

The two have developed an easy camaraderie over the years, which also extends to the mixed and transfixed audience, creating an atmosphere more like a friendly get-together than a showbiz spectacle. There were moments of improvisational surprise more real and funny than anything one might find at Second City, as when a cherubic grade-schooler, wearing a pink shirt bearing the words “I eat glitter for breakfast,” bowed with the grace of a true pro after being seemingly cut in two by a rope.

“The Magic Cabaret” is both a civic institution and a time capsule, harking back to an era when performers learned on the job, rather than being credentialed by drama schools to meet the checklist standards of corporate funders. Mixing vaudeville pacing and patter with night-club intimacy, the act delivers expertise without pretension, producing the kind of direct and involving experience that all theater ensembles wish for, but few attain. One hopes that the show runs forever, but you’d be wise to catch it now. (Hugh Iglarsh)