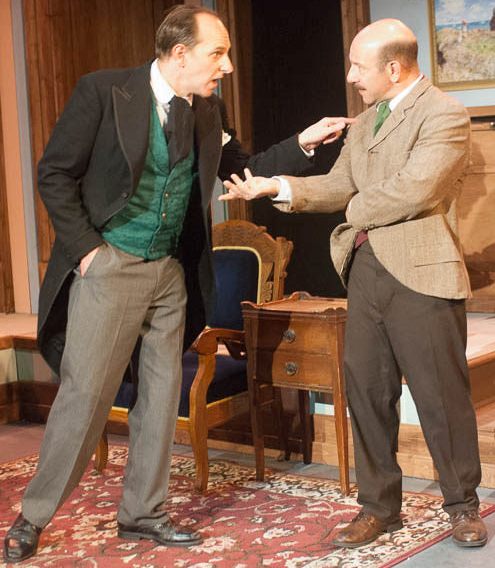 My favorite part of Sherlock Holmes’ stories is always when, after Holmes relays a long list of facts about an individual’s life, he breaks down how he gleaned each and every fact from the tiniest, most unassuming clues. A frayed sleeve, or a station ticket, perhaps. It’s fun to see how his mind works, even giving me hope that I could perhaps do something like that as well, if I kept my eyes open.

But seeing is not the same as observing—Holmes says as much in “The Seven-Per-Cent Solution,” currently running at City Lit—and so initial impressions about this new adaptation might tell you little about its real content. Ostensibly, the play appears to be an alternate history of Holmes’ final case and cocaine addiction, being told by an elderly Watson. The adaptation of Nicholas Meyer’s novel receives its largely faithful first production here, with an all-white cast under the direction of Warner Crocker. The syntax of the dialogue sounds like Arthur Conan Doyle, and the performances are strong across the board, especially from Adam Bitterman as Watson, and the small roles played by the two female members of the cast (Adrienne Matzen, Chelsea Roberts).

But an unassuming appearance can hide the greatest surprises, and the most delightful performance in the production is that of Lee Wichman, whose character becomes an assistant and companion to the Holmes/Watson pairing for the play’s second act, a necessary addition, given that the second act is where the script begins to fray like a telltale sleeve. The issue of Holmes’ addiction fights for stage time with the mystery that inevitably arises, and the stakes of the mystery become unnecessarily international. But the story is still filled with intrigue and action, building to a thrilling and well-staged climax—though one wonders why the elderly Watson framing device reappears then, rather than at the play’s close.

Still, if you like Sherlock Holmes as much as the world seems to, “The Seven-Per-Cent Solution” emerges as a competent play circling around the detective, his doctor and their Austrian friend.

But remember: the smallest facts tell a lot. (Zach Barr)