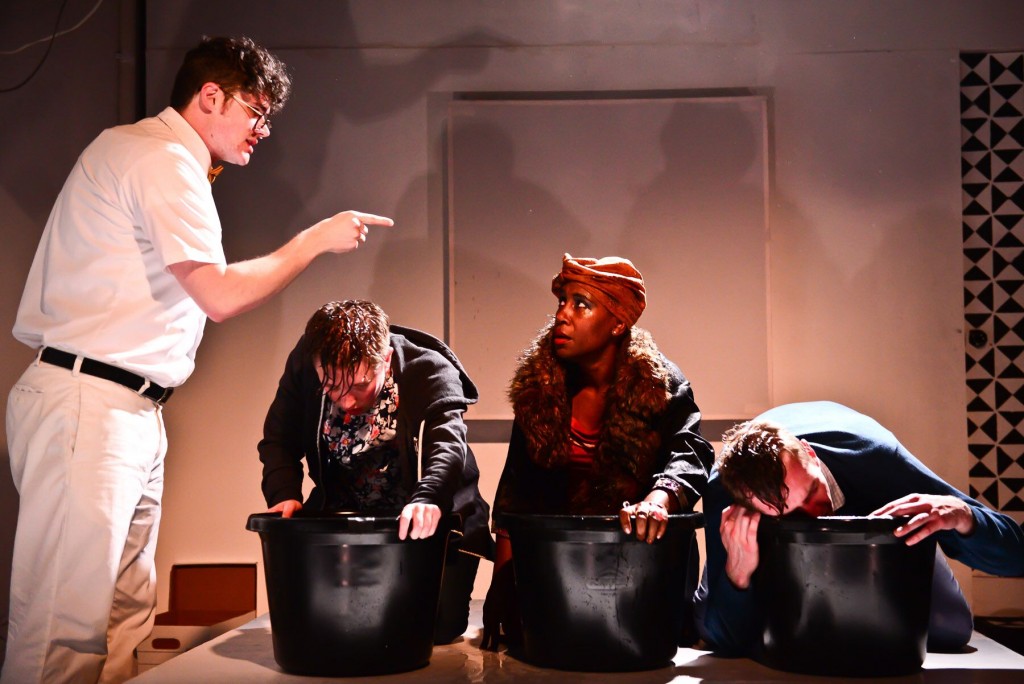 If you take the events surrounding Virginia Woolf’s suicide, turn them into an art installation, and then plummet her updated self into a “No Exit”-like Hell, then you have a germ of an idea of what Morgan McNaught’s “The Terrible” is about.

Woolfe (Jessica Landon-Shields) is a performance artist whose final art installation is filming her own drowning via an iPhone and an internet stream. She expects this to be her comment on life, and all the crap that goes along with it. What she doesn’t expect is to wake-up shortly thereafter in a room with three other people. Christopher (Chris Fowler) is a likely gay, mostly confused man whose life was cut short by a bullet to the brain. Gertrude (Shariba Rivers) is a woman who lost her child to another woman during the days before World War II. Everyone present is being guided through counseling sessions led by Fred (Andrew Hobgood). While Sartre’s masterwork posits that Hell is other people, Fred’s methods and cruelty may lead one to believe that Hell is only one person, and that is Fred. Or, perhaps just therapists as a class of people.

Director Jesse Roth’s production is strongly informed by a sense of play, despite addressing a serious and dour topic. While each of the participants in the tale must repeat his or her own death ad nauseam, the absurdity of the situation and the antics of those present are seen through a playful lens that mocks while at the same time exploring deeper meanings.

The play comes off as a bit weird, but interestingly so. It sticks with the viewer long after the lights go down. And those lights are an instrumental part of the production’s success. So are the set and the sound. This is one of the best examples of a cohesive design concept that I’ve seen in a while. Kudos go to Claire Chrzan (lights), William Boles (set), and Morgan Lake (sound). For most of the show, I was able to forget that I was an outside observer and just be immersed in the world the play creates. (Christopher Kidder-Mostrom)