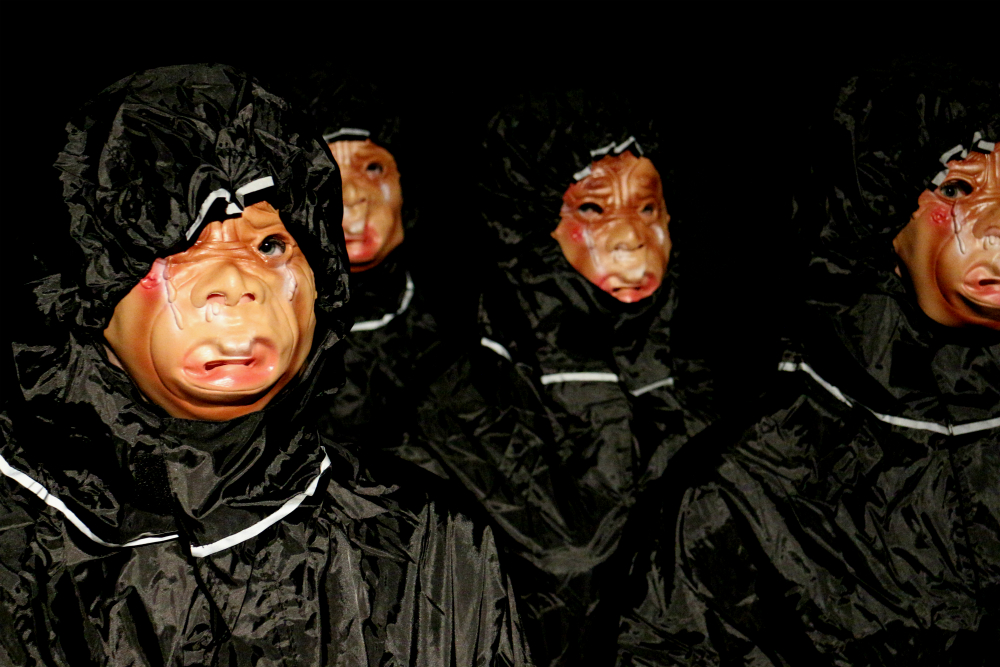 Not knowing what to expect while standing outside in the drizzle, waiting to be allowed into the Dream Laboratory, it is difficult not to stuff down the tittering giggle that haunts my throat. I’m only able to transmute that nervous laughter into an idiotic grin after being carefully herded through the door to sit in a row of four chairs crammed up against a stage set in the woods. The sound of flies buzzes in my ears and a decaying, bloody opossum hangs from a branch before me.

What follows in Jeremy Menekseoglu’s short and sweet “Audience Annihilated Part Three: The Trouble with Angels” is more precise than horror—it is the nightmare of urban America. From the stage in the woods, the audience is led to a second stage: a cabin in the middle of these woods, beer cans hanging from the ceiling and littering the stage. Part of the audience plays Angel, and if you’re so lucky, you will sit at the picnic table on stage to be berated by your drunken mother who is disappointed and disgusted that you’ve been wandering out in the woods alone.

Of course, there is something worse in the woods than what your mother fears, and as she falls into a drunken sleep, you learn what that is when several hooded and masked figures come crashing through the door. Like the most horrifying things, it is not immediately obvious who or what these figures are or what they want.

Though the premise of the show proceeds to become even creepier, I could not wipe the idiotic grin from my face, partly out of apprehension but also in part because of the clever ironies that unfold. Throughout, the cast does an astounding job of crafting and maintaining their characters, especially given their proximity to and interaction with the audience. “Audience Annihilated Part Three” is so entertaining and thoroughly detailed that you fall solidly out of your world and into theirs only to be relieved twenty minutes later that it was just a play. (Joy Miller)