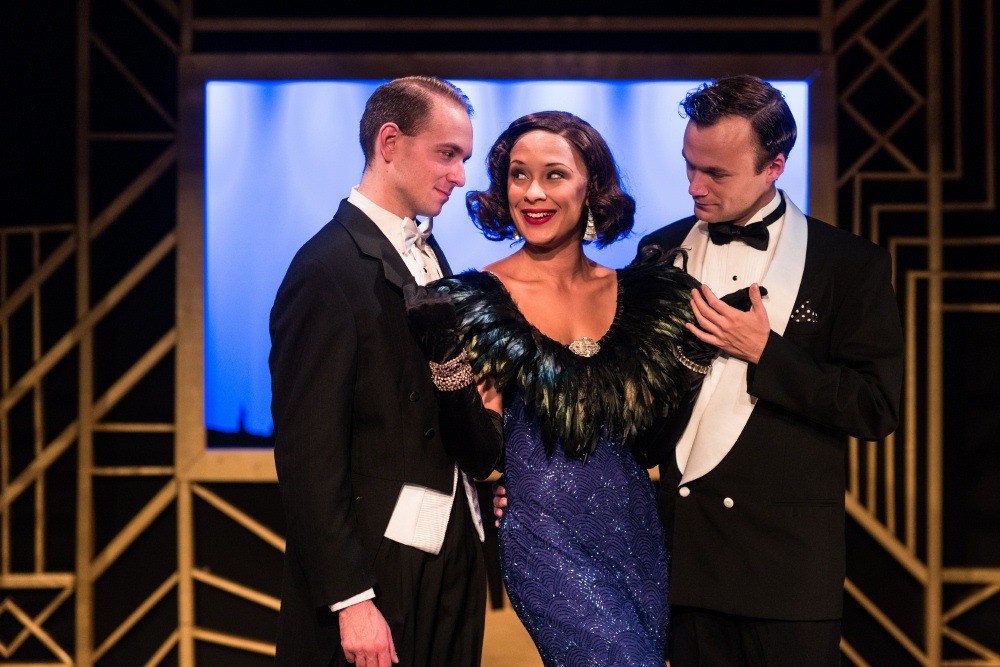 Clear vision and attention to detail can be seen throughout Pride Films & Plays’ newest production, “Design for Living” by Noël Coward. Once the biggest hit on Broadway, this play was seen as scandalous at the time of its original premiere. Director Derek Bertelsen captures the wildly entertaining spirit of the work, which remains relevant and topical today, if not as earth-shattering as it was back in the 1930s.

The play addresses issues of non-traditional marriage, or at least non-traditional relationships, through the story of Gilda (Carmen Molina) whose love for Otto Sylvus (Matthew Gall) is only equaled by her love for Leo Mercuré (Kevin Webb). Otto’s love for Gilda is only equaled by his love for Leo, and Leo’s love for Otto is only equaled by his love for Gilda. It’s a ménage à trois in the truest sense—not the sex act, but the “household of three.” The show’s comedy does evolve out of the perceived betrayals that come from one set of partners having affairs with the others, but the play takes on the very assumption that there’s anything wrong with the affairs to begin with. So, while the comedic structure is basically set upon the foundation of British farce, a sharp left turn is taken down a path that results in characters being better for doing just what they will, rather than what society expects of them.

Molina is exceptionally strong in her part. She plays with nuance, precisely calling upon the right expression to evoke a moment of coy humor or deep anguish. Webb and Gall are a wonderful comedic pair, sharing a chemistry that makes their scenes together an absolute joy.

It is clear that Bertelsen not only called upon his cast to embody the age, but also his designers as well. Sets (G. Max Maxin IV) and costumes (John Nasca) most notably create the world of the successful depression era artists who live a life of whimsy. The Art Deco motif that permeates every instant of the show glitters forth from every sharp angle and sparkles upon every sensuous curve. (Christopher Kidder-Mostrom)