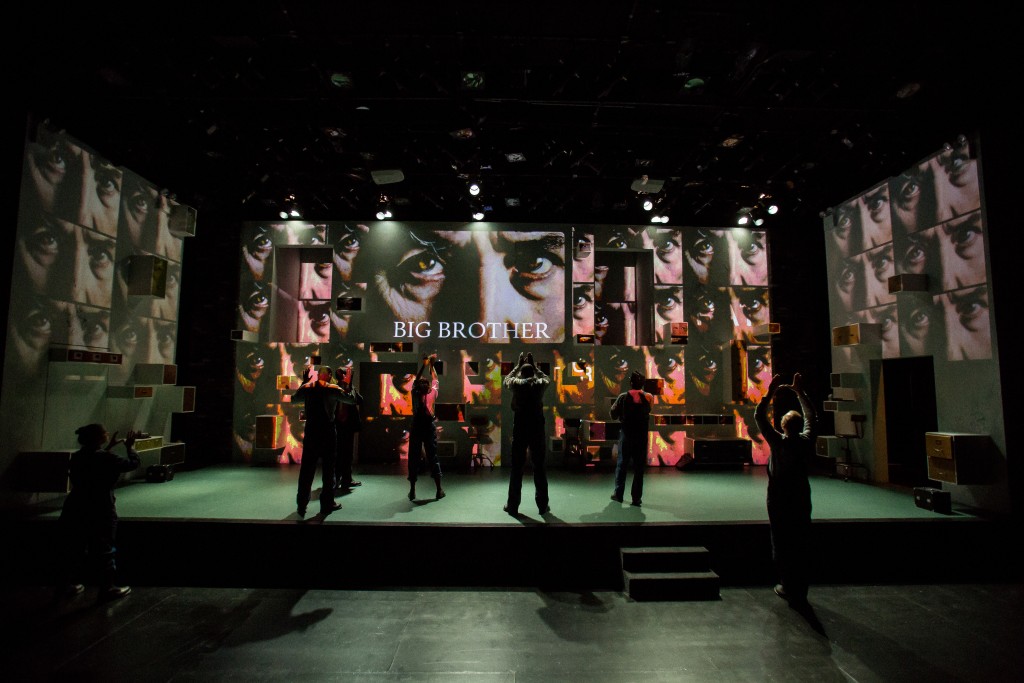 Bringing classic literature to life is always a challenge. Those challenges are especially clear in Steppenwolf for Young Adults’ production of “1984.”

Directed by Hallie Gordon, this adaptation of George Orwell’s dystopian novel is much warmer and far less sterile than expected. Andrew White originally adapted the book for a Lookingglass production in 2004 (for which he won a Jeff Award for Best Adaptation). However, this production has been heavily revised from that script to focus on some of the book’s nuances—like Winston’s (Adam Poss) inner mind battle, often trying to remember his past, his family and a time before Big Brother. The set (designed by Collette Pollard) is full of colored drawers that contain elements of the past. Screen projections (designed by Joseph A. Burke with Joel Moorman as Director of Photography) tend to display fall trees, colorful landscapes—especially in Winston and Julia’s (Atra Asdou) love scene—and add to the feeling that Oceania could be happening right now, anywhere in the world, and we might not realize it.

This adaptation is also more heavily focused on technology. Winston and the citizens of Oceania are forcibly glued to devices. His job is to alter the truth. He does this by scanning a barcode tattooed on his neck to log in to an iPad-like device and change memory cards containing daily news—shown on projections. Though the projections are visually interesting, they’re also overwhelming. It’s nearly impossible to keep up with all the changes happening on the screens, and perhaps that’s the point. In Winston’s day-to-day life, things change so quickly—like the idea of whom Oceania is at war with—that it becomes impossible to stay in line with the Party. The Thought Police play a more dominant role in this production as well—roaming around the stage, staring down characters and audience members alike.

As relevant as Orwell’s work is to contemporary society, a lot of the book’s harsher elements have been toned down to make it more manageable for younger audiences to digest. However, the harshest lesson in this production is as long as Big Brother is watching conformity wins, even if one’s spirit isn’t completely crushed. (Mary Kroeck)