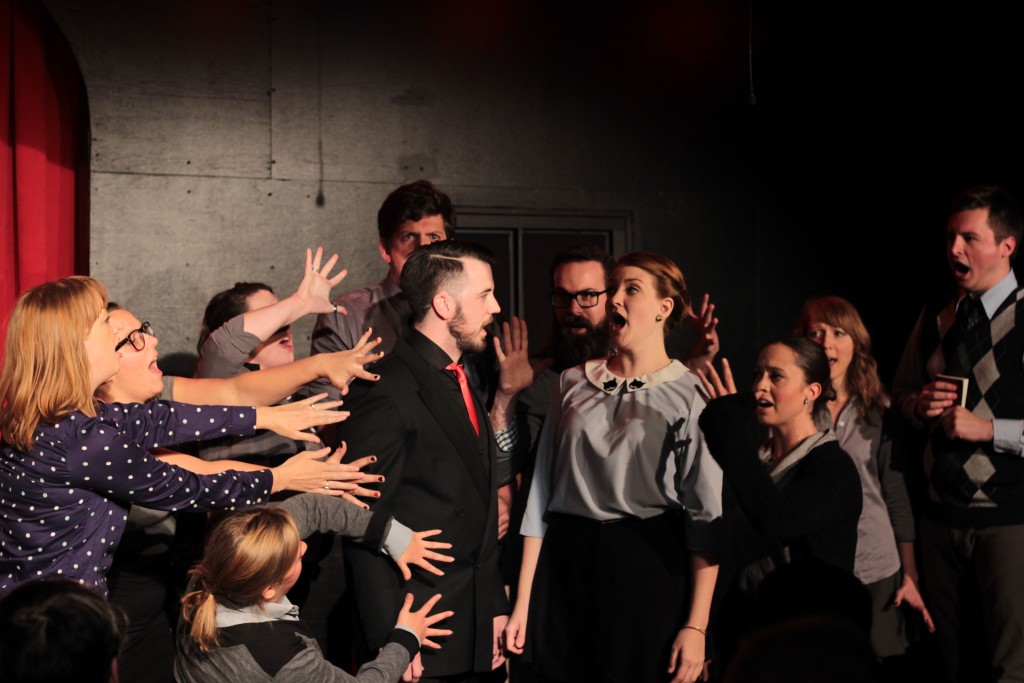 In “Tribulation: The Musical, ” playing now in iO’s Mission Theater, mankind’s worst fears are confirmed—the world is burning and murderous Horsemen of the Apocalypse ride the streets, but you still have to show up for your shitty nine-to-five. For would-be-poet Genevieve (Sarah Hoffman), not even the Rapture distracts from the fact that her dreams of intellectual stardom have given way to a data-entry gig she hates and co-workers whose companionship she dreads. And that’s before her company is suddenly taken over by the Antichrist.

The biggest problem with biblically based comedy is that you usually see the punchlines coming from the parking lot. Here, however, writer Molly Miller knows when to duck away from expectations and when to lean into them. Her script and lyrics spend as much time laughing at scientists and self-serious artists as it does the pocket bible and sweater vest crowd.

Characters that would come off as one-note in another show are developed into three-dimensional human beings. The brash, vulgar slut—a character type you can come to dread after a few bad improv shows—is by turns nihilistic, caring and heroic. Affable grad-school stoner Jesus (Zach Dimond during this reviewer’s performance) takes the world’s most shopworn comedy trope and infuses it with heart and purpose, while also being incredibly funny.

Sarah Dell’Amico is the cast’s secret weapon as middle manager Sally, who isn’t so much seduced into evil as much as she gleefully embraces the opportunity to turn into a human trashpile. And Chris Blake’s antichrist (no spoilers, his name is literally Dameon Goodman in the program) glowers and menaces while he pulls her strings. Miller and director Tyler Samples’ decision to let him play it straight pays off in keeping things grounded when they need to be.

See it for the songs if nothing else, especially “Someone You Hate Dies,” an instant classic. Composer Brad Kemp, choreographer Lauren Lopez, and musical director Charlie Worth pull off an amazing job of creating immersive, polished numbers in a relatively small space.

Come for the music, stay because you hate your job and life as you know it could end in a rain of literal Hellfire at any moment. (John Carruthers)