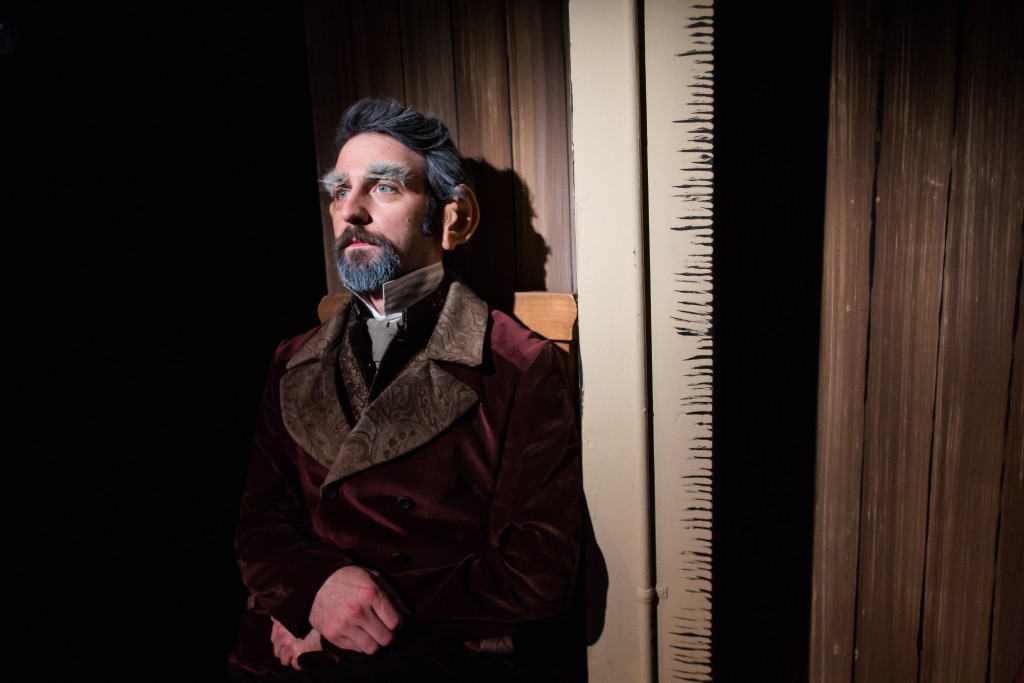 One of the best things about theater is that it can carry you away to an unusual or even bizarre world and immerse you within its wild environs. I am a big fan of shows that create absurd situations and universes within an intimate space. The Plagiarists do exactly that with their production of Robert Stewart’s “belladonna luna sonata.”

From the moment the audience walks in, they are unknowingly watching the show. The performance starts ten minutes prior to the house lights’ dimming. It is clear that every single moment of this play is carefully and thoughtfully staged by director Gregory Peters. Once the lights shift and the official proceedings of the evening begin, we meet Maestro Signeretti (Nick Freed). This eccentric and self-proclaimed genius is a composer whose fame stems mostly from his failed attempt to destroy the planet via a musically induced violent cataclysm.

He and his manservant (Derik Marcussen) relate the details of the Maestro’s life to a reluctant audience of one: the Maestro’s gardener (Sean McGill). These three are joined on stage by three ladies who play an ensemble of characters, as well as the love interests of Signeretti’s life. Julia Stemper, Jessica Saxvik and Sara Jean McCarthy each carry a section of the show, but perhaps more importantly, they act as puppeteers.

The staging of this show is limited to the confines of a single room which scenic designer Katie-Bell Springman created to look somewhat cartoonish, and somewhat period, although just what period one can’t pin down. That limited space is brilliantly filled with often frenetic action, and one overwhelmingly large picture window.

During many of the scenes, the picture window is the host to puppet shows which illustrate or comment upon the action of the play itself. The puppets vary widely as to size and scope. But each one adds to the wonderfully odd world that the play builds around its viewer. While a text-heavy show, the element of physical spectacle informs each moment of the script’s realization, with each actor’s efforts contributing to an all-enveloping whole. (Christopher Kidder-Mostrom)