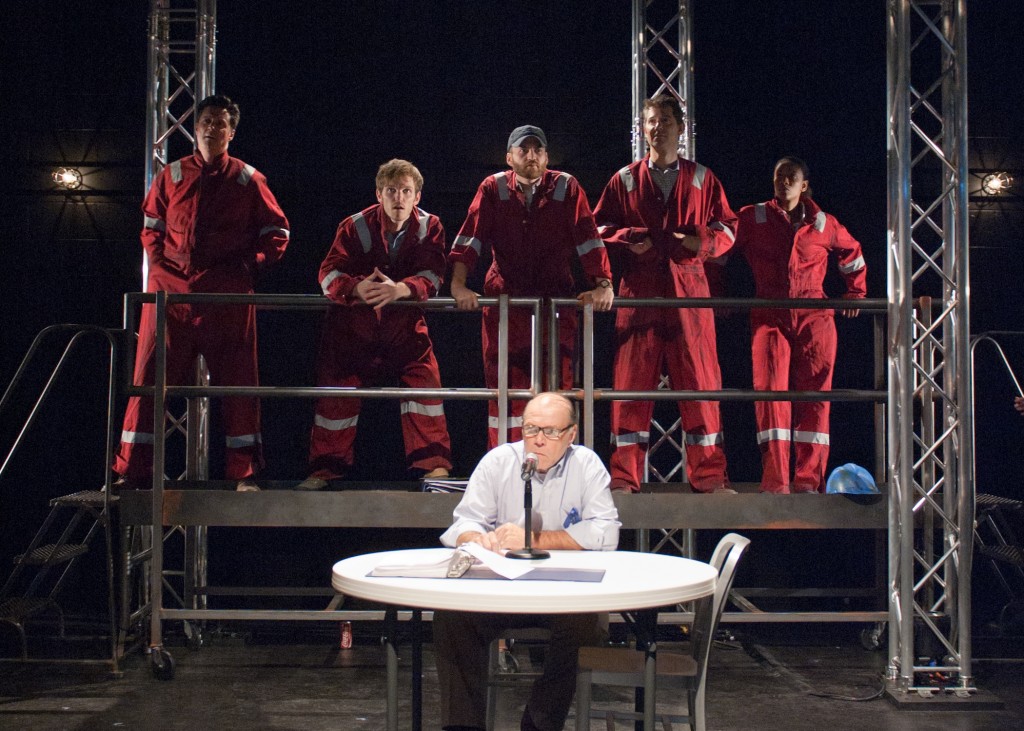 There is a good deal of talk about equations in Leigh Fondakowski’s “Spill.” Some are concrete, others highly theoretical. Yet the most impactful is, unsurprisingly, the simplest. “A plus B equals C,” a professor of engineering intones with understated fury. A stands for nature. B represents the human capacity for hubris and greed. C is catastrophe.

Taking the explosion of the offshore drilling rig Deepwater Horizon and the subsequent seeping of millions of barrels of oil into the Gulf of Mexico as its subject, Fondakowski applies the rigorous methodology of “The Laramie Project” to this complex play that seeks to define the true value of human life.

Comprised of hundreds of interviews and spanning a tumultuous period of American history, “Spill” poses a number of challenges, not the least of which is how to coherently tell a story where morality and reality are in deep conflict. Of all her notable gifts, Fondakowski’s skills as an editor and arranger are most present here. Despite the play’s narrator being a clear proxy for herself, Fondakowski’s presence is largely invisible to this proceeding.

While television media—much the focus of ire for some these days—has the tendency to condense, Fondakowski’s approach with “Spill” more closely resembles the brand of radio journalism that Chicagoans are plenty familiar with. Guided by a philosophy that a point can be more powerfully made by allowing for complexity and contradiction, the various voices in “Spill” don’t interact directly as much as they coalesce inextricably.

Given the constantly shifting physical and narrative terrain, the hurdles posed to the ensemble here are formidable and numerous. While all rise admirably to the challenges implicit in this kind of broad storytelling, Justine C. Turner, predominantly playing an offshore drilling lifer as well as the wife of one of the eleven workers killed during the explosion, beautifully embodies the unresolvable nature of our reliance on oil.

The second-most memorable calculation in “Spill” is more depressingly shrewd than the first. Each life aboard these deep-water rigs is insured for one million dollars. If the revenue lost by shutting down a potentially dangerous operation exceeds the sum of those life insurance policies, the company does not stop drilling. As a work of socially conscientious art, “Spill” marks the delicate balance between making a living, being alive and life as we know it. A great tragedy, Fondakowski makes one thing painfully clear: this is more than a play. It is an ongoing reality for the citizens of the New Orleans coastal region. (Kevin Greene)