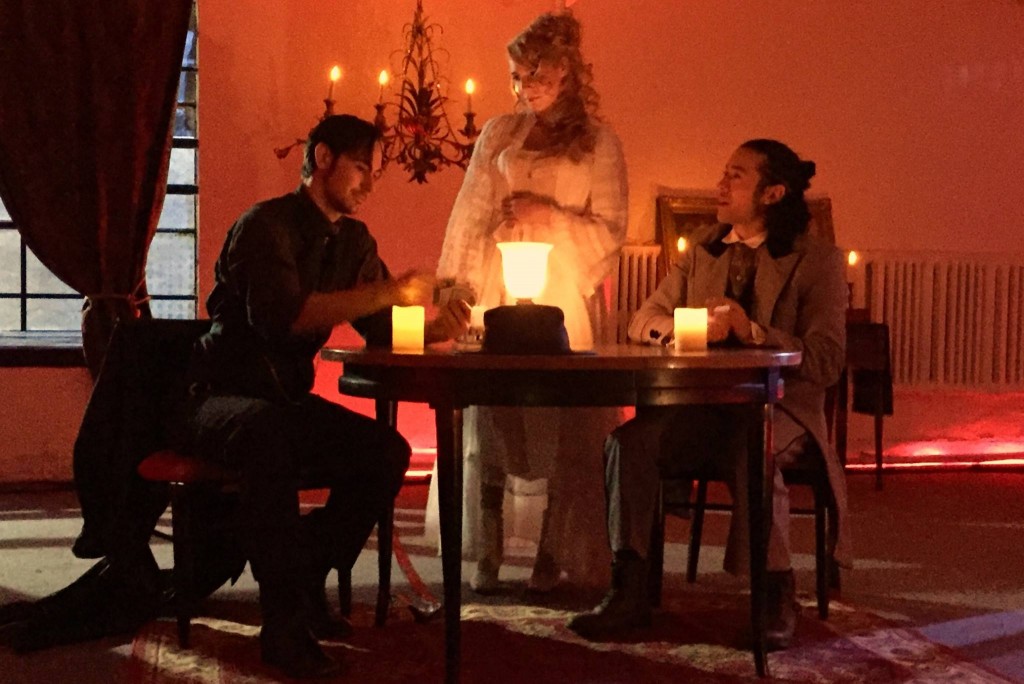 Stuart Bousel’s vampire-hunting opus “Gone Dark” is appropriate fare for staging within the walls of a gothic church. Director Tiffany Keane takes this play about an annual reunion of vampire slayers and places it in various parts of Epworth United Methodist Church in Chicago’s Edgewater neighborhood. Presented in promenade style, the audience moves from room to room to follow the action. The atmosphere which permeates the space is accented by aspects of the sacred and the profane. It is the perfect venue for an invasion of the undead.

The cast is headed by Brendan Stallings, who plays Ned Dalton, a vampire hunter who struggles to do the right thing while being tempted by his darker nature and a beautiful young vampire named Urania (Mary-Kate Arnold). He also fights an impressive battle against his former apprentice, Eugene (Kai Young), who has been turned into a vampire. Basically, the play is the tale of one really bad day in Dalton’s life. Unfortunately for him and us, that bad day is made up largely of the same things that make our own days miserable: meetings and unnecessarily long-winded arguments with coworkers. He does manage to start a new love relationship, as well, so there is an upside to his dark day.

The acting of the show outshines the weaknesses of the script, and Keane’s staging does make the production more interesting than it would be were the show presented upon a standard stage. It’s worth seeing as an example of well-executed use of a found space. It isn’t terribly scary, nor much of an adventure story. Yet, the emotional journey portrayed by Stallings is certainly interesting viewing. (Christopher Kidder-Mostrom)