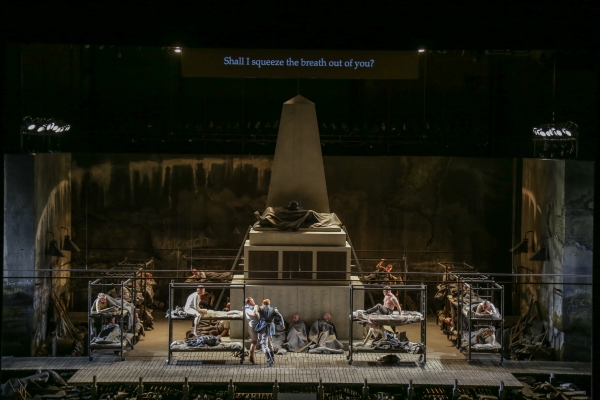 The Lyric Opera of Chicago launched its season with two confections—cakes appeared on stage in both—and now moves on to meat. If “Le Nozze di Figaro” and “Cenerentola” focused on the strictures of class structure, “Wozzeck” deposits Lyric’s audiences into the madness of war, and the way it destroys body, heart and that elusive imperative, the soul.

When art is disquieting, it perhaps functions at its highest purpose. “Wozzeck” is the toughest cut of beef, reaching the gullet after sawing through it with the sharp knife of examination. It’s a choking-swallow, and a rocky digestion; the psyche cannot help but remember this meal, reconsidering, re-evaluating.

Lyric’s orchestra leads the charge, via the complex writing of composer and adapter Alban Berg, and the unremitting doggedness of conductor Sir Andrew Davis, surrounding the audience with thuds and crashes that push against the eardrums, thin, erroneous wailings of under-schooled trumpeters, an exhaustedly out-of-tune piano, and a mismatched, onstage band. War is everywhere, unrelenting, always shocking, and always the same; Berg’s atonal writing and built in symphonic structures organize the gore.

Whether shouting, snoring, or scolding, Michael Black’s chorus rises to the brutality, forgoing its attractive, rounded sounds for vocalized mayhem and oblivion. Vicki Mortimer’s set and costume design is so disgustingly unwashed, sweat wreaks to the back of the balcony.

Director Sir David McVicar brings an inexorable pace to the piece; with the use of simple curtains, drawn across the stage at exactly the velocity needed to keep the arc intact, McVicar drives the fifteen scene-snippets mercilessly. Except David Portillo, a brilliant artist with a voice that, even when insisting, is too lyrical to rise above this hammering orchestration, all the principals present fearlessly, with Wagnerian power, vocally and histrionically.

For ninety minutes, the audience did not applaud when I attended, brutal shank steak sticking in their soul’s throats. This is staged cinema. Except for the cries, the words are nearly spoken, the masterful orchestration supplying the background, hurtling you into the action. Come to the table. (Aaron Hunt)