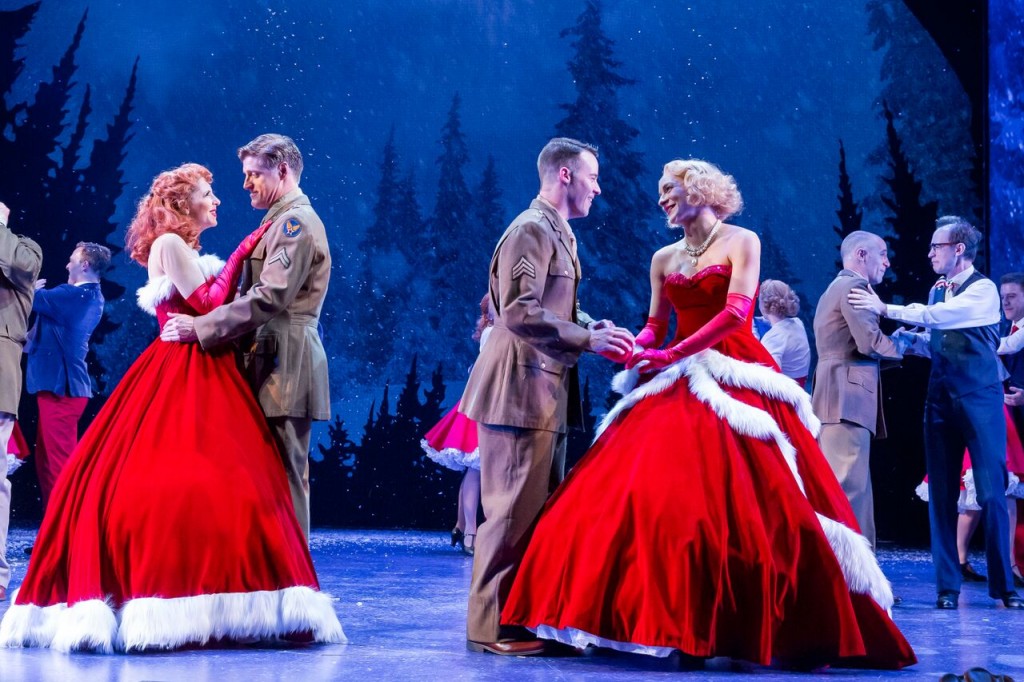 A film-to-stage musical enjoying regional success, “White Christmas” is based on the 1954 movie of the same name. Starring Bing Crosby, Danny Kaye, Rosemary Clooney and Vera-Ellen, the movie was “a smash hit,” earning that year’s highest grosses. If the critics haven’t been kind to the stage version, audiences ignore them, and cozy up to the story of a couple of singing and dancing war veterans and the inescapably charming women they fall for, accompanied by a list of other zanies, set to the glorious tunes of Irving Berlin.

Drury Lane Theatre’s production is every bit as “smashing.” The formula for a solid production of “White Christmas” is casting, casting, casting. The four leads have to be solid triple-threats, and ooze heart; the audience needs to be able to fall into them, connect to their temerities, revel in their wins, and join them in shedding tears both sad, and happy.

In the Crosby role, Sean Allan Krill charms. As adept in comedy as he is openhearted elsewhere, Krill reminds us that he’s more than a handsome man with a terrific voice and a dreamy countenance; his stout-hearted, inexorably shy portrayal is the audience’s door into the world of the play. Making no attempt to imitate Crosby’s fuzzy, back-of-the-throat delivery, Krill serves up songs in his own clear voice, in exactly the period-appropriate style.

The love child of Donald O’Connor and Danny Kaye, Matt Raftery sings, dances, skirt-chases, and mugs up a storm, finally collapsing into the arms of Erica Stephan, who is every bit as winning as Vera-Ellen, and can do her own singing.

Rosemary Clooney was a popular music recording star who surprised everyone with her understated, warm-hearted performance. Gina Milo steps into those high heels with ease, and makes the famous torch song her own.