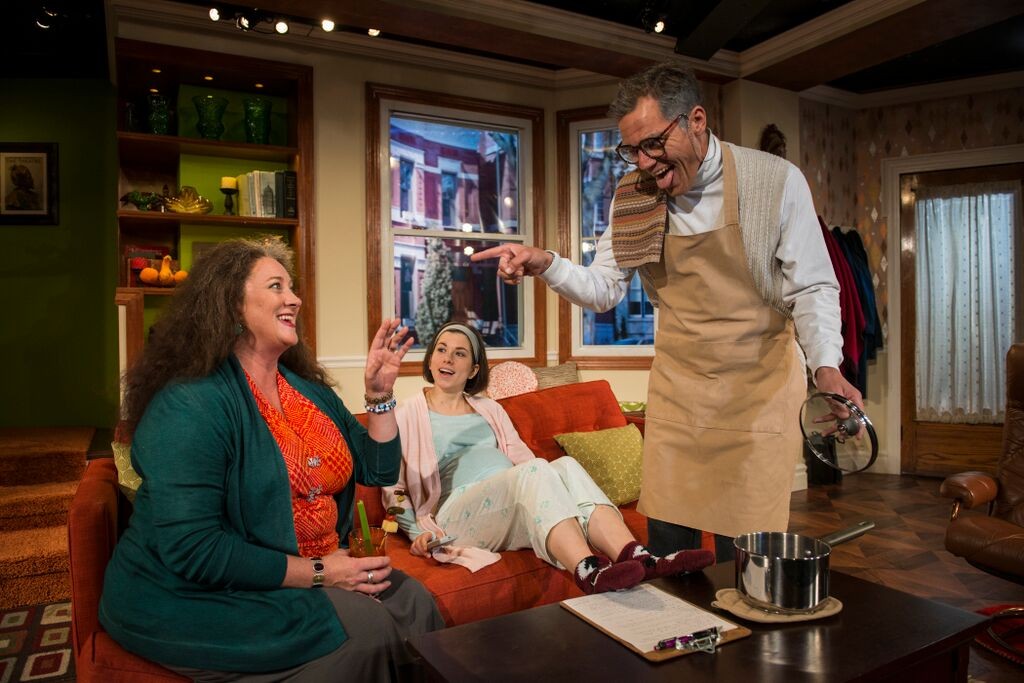 Several years ago I saw a play written by Brett Neveu called “The Earl.” In it a group of siblings beat each other up in a warehouse while citing a set of intricate rules for the melee. “Much of Brett Neveu’s uber-dark, fast-paced script seems like a collection of secret rules and inside jokes, ” I said at the time. Neveu’s latest, “Pilgrim’s Progress,” now enjoying a viscerally hilarious world premiere at A Red Orchid Theatre, feels like the expansion and further development of the familial unit that raised the kids beating each other up in that warehouse.

In this twisted “Adult Swim”-esque staged sitcom of hyperrealism and over-the-top impossibility (Chelsea M. Warren’s set captures this mix nicely), all the social contracts we inherently make with each other are manifested in physical documents drafted by patriarch Jim (a near-impossible-to-look-away-from Michael Shannon), debated by the family and signed (typically in pen, but in blood for more drastic agreements).

As the family prepares to head to Jim’s frenemy’s house for Thanksgiving dinner, matriarch Melissa (a stellar and uncompromising Kirsten Fitzgerald) recounts her clients’ deepest secrets (she’s a therapist) and Jim recounts his not-so-stellar accomplishments in the theater (he’s a teacher at a local college). Their children, reticent and pregnant Rania (Charlotte Mae Ellison) and confused but assertive Desmond (Ryan Bourque), indulge, ignore and endure their parents’ antics with an air of resignation.

Both Shannon and Fitzgerald are all-consuming presences, each with a laser-like focus on whoever they’re speaking to. Together they’re magical; the only place you’ll find more chemistry on a Chicago stage this fall is in the smoke machine in The Goodman’s “A Christmas Carol.” Director Shade Murray has harnessed this duo’s energy and crafted performances of tight control that can explode without warning. Throughout the production there’s the constant exhilaration of never knowing what’s coming next.

“Pilgrim’s Progress” is so entertaining that it hardly matters that Neveu starts to lose the thread in the final minutes, as things begin to go a bit too meta, almost collapsing in on itself with the impenetrability of the infamous “Too Many Cooks.” But this show is sold out because Michael Shannon is in it, not because the new script tidies itself up nicely. And he deserves the hype. This is almost certainly the show not to miss this year… with apologies to those currently without tickets: if you’re reading this it’s already too late. (Zach Freeman)