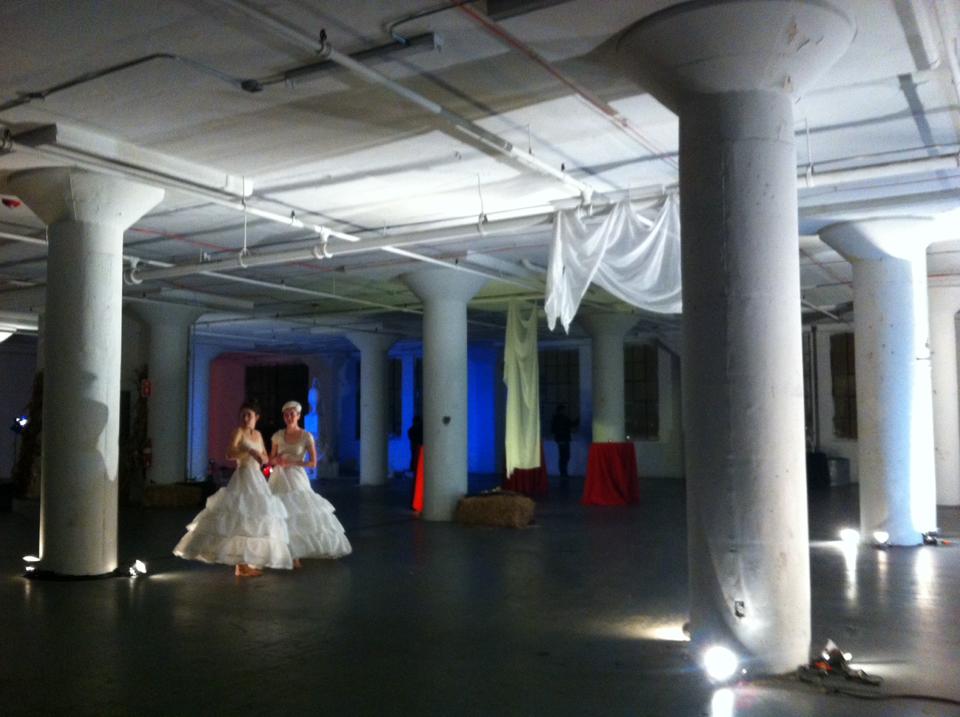 Few artists or dancers engage their subjects with anything near the capable, distinct voracity of Victoria Bradford’s punctually conceptualist, stratospherically aspirational choreographies. At a special preview of “Ghost Skirts,” performed where the full piece will be presented at High Concept Laboratories, Bradford, Lia Kohl and Jessica Cornish brazenly and boldly hold the line on those standards. Consistently structuralist in approach, the dancers present in the restrictively bilious gowns of idealized dance performers, all in bright white, perfected, markers of restrictive, distinctly physical visuality. Vivisecting this audience perception of “perfected” femininity as merely a form of adornment lends the performance the context of deconstructing the performative figure itself. Initially, both dancers appear only as skirts, following a recorded Wittgensteinian lattice of voiced instructions, followed attentively by an apprentice dancer’s movements, à la Donald Judd-like instructions to museum installers. “Draw a line following the curve dictated by the length of your arm from a point 120cm from the base of the wall” here becomes something along the lines of “execute movement, staying seated on the floor using your skeleton as the point of reference” (memory fails on the exact stated verbiage). In this, the power of despotic impartation of control evinces a form of identification within the context of the dancer’s draped body movements, an attempt at its exultation beyond the clothes given it to work within, and the limits of its costumery. Then, slowly, humorously, feet emerge sticking out of the folds at the bottom. Hands pop out the lacing at the top of the clothing. The apprentice emerges, is sent out into movements, eventually drawn back to help dress the body of the master, and is enjoined into the fullness of human embodiment, together, two dancers in the fullness of their apotheosis beyond the clothing they are given to wear. Not to be missed. (Michael Workman)