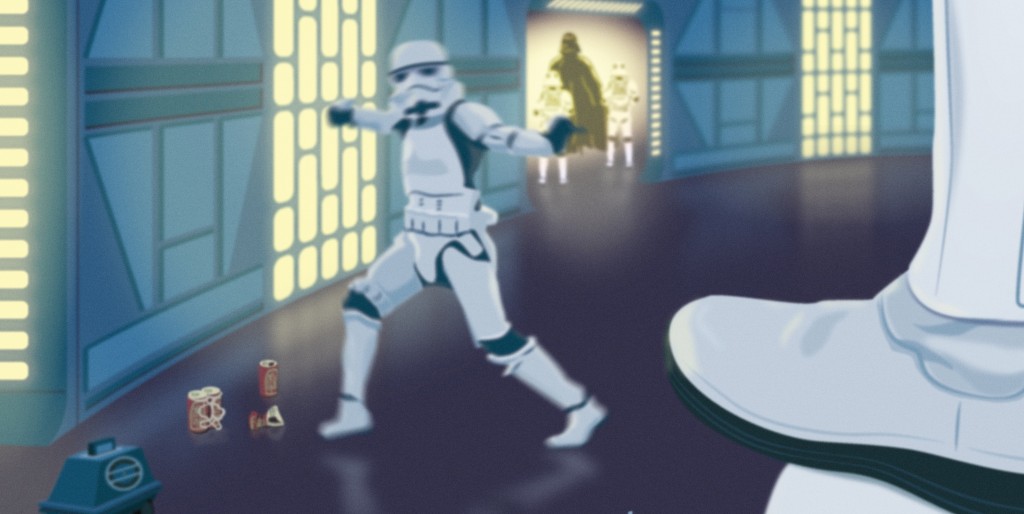 Writer-director Byron Hatfield offers a different perspective on the Star Wars saga in “Stormtrooper Stories,” a comedy about two inept troopers (Matthew Lamson and Mark Rosenthal) who just cannot catch a break. Whether it be pulling traffic duty on Tatooine or watching a fellow trooper be “magic choked” to death, these two intergalactic soldiers stumble over more territory than the Millennium Falcon. And in the process they realize that maybe, just maybe, they’re not actually the good guys.

Hatfield’s mix of existentialism and slapstick is smart and surprisingly insightful. While not quite worthy of a “Rosencrantz and Guildenstern Are Dead” comparison, this is certainly a better-than-average Star Wars parody. For starters, the comedic chemistry between Lamson (stoic and by the book) and Rosenthal (slovenly and maybe cloned a few too many times) is natural and engaging. Their slow awakening to the Empire’s true nature is particularly natural. Andrew Kudla also amuses as the Death Star’s cynical Human Resources Manager. And Julia Chereson, as various characters including a seductive Control, injects enough energy in the closing scenes to end the show on a high note.

The production values as a whole are simple but effective: a mangled mannequin, smart Stormtrooper costumes, and a few strategic snippets of the classic movie to help the audience sort out the plot. A few recurring bits concerning messenger drones and Bothan spies do become a bit tiring, but for the most part this is a fun, lighthearted romp through a familiar galaxy that seems not so far away. The force is strong enough here that you do not have to be a Star Wars geek to enjoy the show. (Noel Schecter)