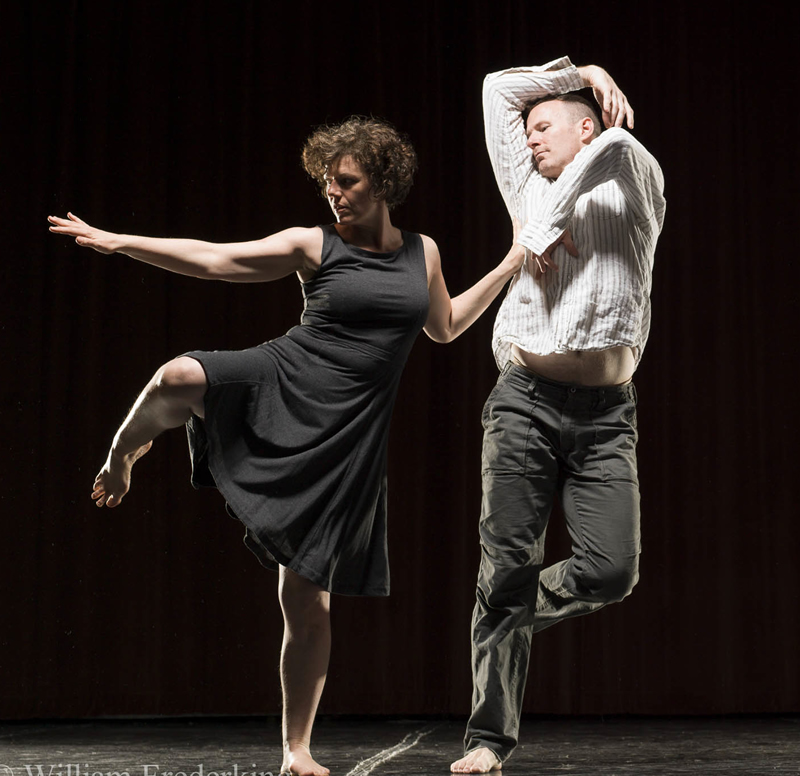 As part of the Chicago Cultural Center’s dance laboratory program, Shanahan and collaborator Jeff Hancock performed this dance, in development since 2012, drawing inspiration from the Grimm folktale Hansel and Gretel. Taking place on a dimly lit stage, using mainly an array of floor lamps to illuminate the stage, the minimal use of stage lighting creates a sense of domesticity and home. Moving and heart-wrenching, the performance often counters the difficulties of its subject matter by foregrounding themes of humor, and the exchange of conscious awareness that take place in the experience of emotional attachments between people. Using recordings in which the performers self-referentially exhume the meta-considerations of humor in dance, while simultaneously performing humorously, laughing as they move, movements evoking gags reflecting the audio, the duo lend the atmosphere a sense of vulnerability to create an emotional context of pause. In one section of the performance, the recorded conversation presents a staggered, often humorous attempt between the two dancers to imagine themselves inhabiting the mind of the other, and to talk, think and move like the other. Eventually, the recognition of the other reaches an apex as the room goes progressively darker and darker until, lowering themselves to the stage floor, their movements blend their bodies, and their desperate attempts, seemingly, to find a way to exist as one, prostrate with longing for a permanent connection, never materializes. (Michael Workman)