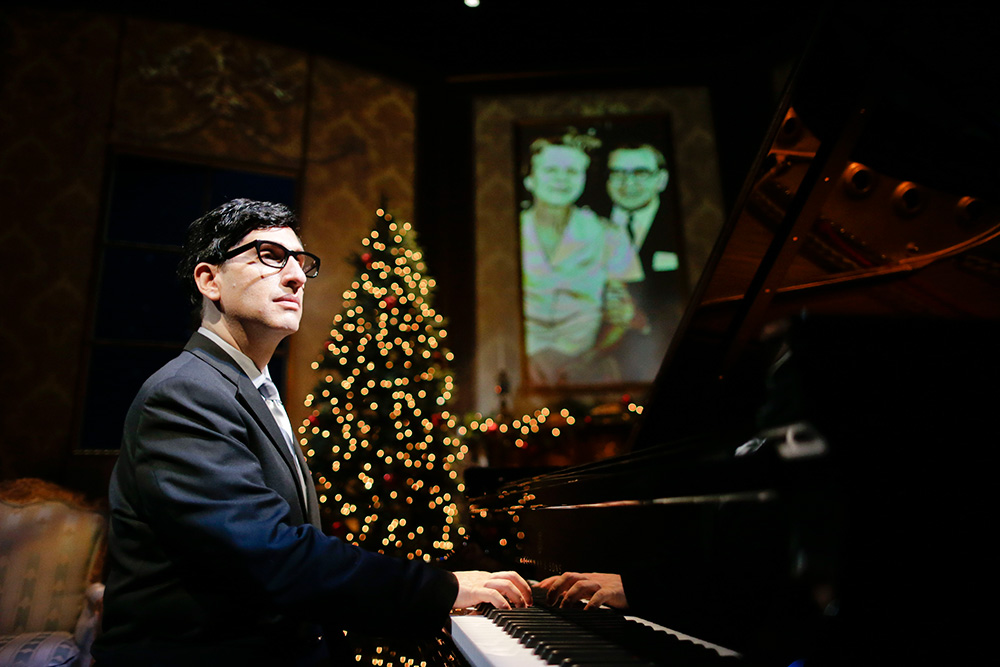 Hershey Felder is one of the last of the old-time actor-managers, specializing in staging one-man musical biographies that combine intimate storytelling with melody. As Irving Berlin–the crowd-pleasing composer, impresario and semi-celebrity–Felder has found a kindred spirit. His own personality fits into the Tin Pan Alley legend’s tale with glove-like perfection. The result, under the unobtrusive direction of Trevor Hay, is two tuneful and anecdotally packed hours of popular music history, which will appeal to theatergoers in direct proportion to their taste and tolerance for schmaltz.

Whatever one thinks of Berlin’s musical prowess, his story is a remarkable one. Born in Tsarist Russia in 1888, Israel Baline, son of a cantor, grew up in dire poverty in New York. The one-time singing waiter became the nation’s top songwriter by age twenty-three with the publication of “Alexander’s Ragtime Band.” Bringing together the soulful singing of his father and the multi-ethnic rhythms of the street, Berlin was a one-man hit factory, composing thousands of show tunes and hundreds of top-fifty hits, not to mention such anthems as “God Bless America,” “White Christmas” and “There’s No Business like Show Business.”

Felder’s Yiddish-inflected New Yawk accent (“Someday I’m going to moider the bugler,” goes one classic World War I ditty) is flawless, his piano playing and singing are better than Berlin’s ever were, and his pugnacious, sentimental manner is convincing, if occasionally monotonous. Even the posture–the exaggerated stiffness of a person who has suffered too much hunger, fear and insult to ever quite relax–is on target. But for all the telling performance details, Berlin the person seems swallowed up by his career and the depiction of his private life lacks dimension.

Irving Berlin lived to be 101, surviving into an era more attuned to “Lucy in the Sky with Diamonds” than “Marie from Sunny Italy.” Yet Berlin’s work–the core of the Great American Songbook–lives on. For all his technical and emotional limitations, Irving Berlin channeled the zeitgeist like nobody else, both reflecting and shaping American taste in profound ways. “Hershey Felder as Irving Berlin” is more than a nostalgia trip: it’s an education about what we were and what we still are. Those with an interest in American cultural history should enroll.  (Hugh Iglarsh)