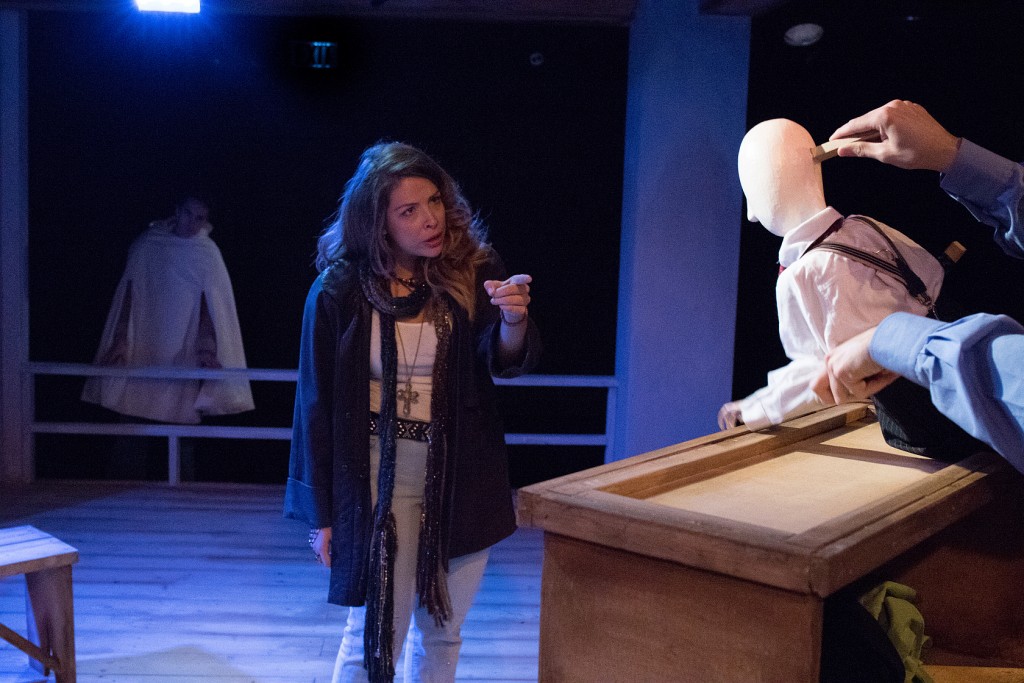 The strategy most theaters employ during this festive time of year usually follows one of two paths. Either they produce a sentimental, nostalgic, light piece of holiday fare that gets people in the seats or they do counter-programming, putting up a decidedly non-holiday show for those who want to skip the whole “good cheer” vibe. Paula Vogel’s “The Long Christmas Ride Home” attempts to straddle that line and winds up getting ahold of the worst of both worlds.

In this play about a family in crisis during one specific holiday season, there is very little of the aforementioned cheer. A man (Ed Dzialo) and his wife (Loretta Rezos) each narrate the events of Christmas Eve and Christmas Day spent with their children and the woman’s parents (both portrayed by John Taflan, who very deftly performs myriad supporting roles throughout the show). The children are represented by tabletop Bunraku-style puppets. In later scenes, the puppeteers portray the adult versions of those puppets. It’s an interesting device and the methods for connecting their actor selves with their puppet surrogates are well-conceived and subtly executed (e.g. Sarah Gitenstein’s puppet receives a scarf; as Rebecca, she wears that scarf as part of her ensemble).

Really, this play could be set at any time. The Christmas setting isn’t that important. And that’s part of why it disappoints. At its core, the play is about a family of not very good people being pretty horrible with each other and then being even worse on their own. Now, I’m not refuting the possibility that is a reality for some people but why would I want to associate it with my own holiday celebrations?

The puppetry, while very well done–every motion of the head or hand is carefully treated and packed with intention and meaning–distances us further from the characters themselves. Additionally, the monologues, choppy writing and presentational acting keep us at arm’s length. With nothing drawing us in, there’s simply no reason to care. (Christopher Kidder-Mostrom)