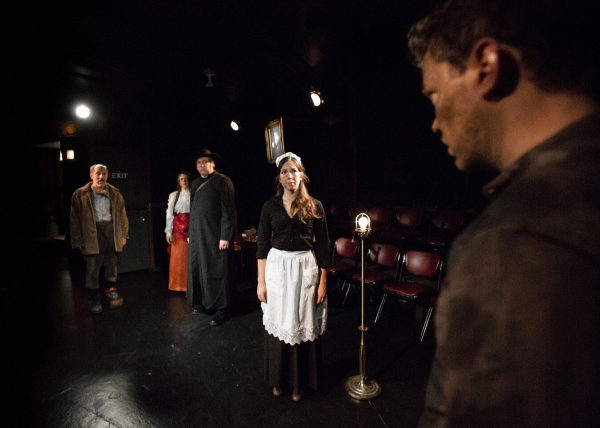 With a few high-profile exceptions, Scandinavians aren’t exactly known for their sunny dispositions. Artists like Jens Lekman, Ingmar Bergman and, of course, Henrik Ibsen, each demonstrate their region’s collective existential frostiness and artistic grace. Pretty fitting stuff for the thirtieth and final season of a storefront theater being pushed out by developers to make way for luxury condos, eh?

Yet Mary-Arrchie’s production of “Ibsen’s Ghosts” is hardly the maudlin weepie it could have respectably been. Adaptor and director Greg Allen injects a shot of Neo-Futurian irreverence into old Henrik’s play, lending it a new sense of immediacy in our highly desensitized, topsy-turvy, post-postmodern world.

By now, most of us are well accustomed to self-referentiality in the theater and how it almost always serves as a means to its own end. Yet Allen shrewdly locates a parallel between these so-called meta-theatrics and the enlightenment that literature offers.

He takes things one step further by offering the audience a handful of truly divine breaks in Ibsen’s relentless realism as when Mrs. Alving (played by Carolyn Hoerdemann) seats herself among the audience while her scene partners continue their conversation without her, regularly referencing an empty chair onstage when they speak about her. Or later when she pulls a copy of “Ghosts” from a stack of books and begins reading her lines directly from the page as her son, Oswald (a breathtaking Gage Wallace), slips into the throes of his unnamed illness.

Suffice it to say, this is hardly wit for its own sake. Allen balances Ibsen’s dense philosophical dialectics on truth versus ideals and fate’s power over free will with absurd asides. Moments of Pinter-esque profanity—at one point a priest screams “Jesus titty fucking Christ”—are so shocking that they actually end up balancing Ibsen’s hefty preoccupations, lending the entire evening a sense of winking good taste.

It’s as if Mary-Arrchie, soon to be a ghost itself, is saying “we know what you expected but here’s what you need.” “Ibsen’s Ghosts” honors its home theater’s legacy by offering a hilarious and heartfelt meeting of the past and the future. (Kevin Greene)