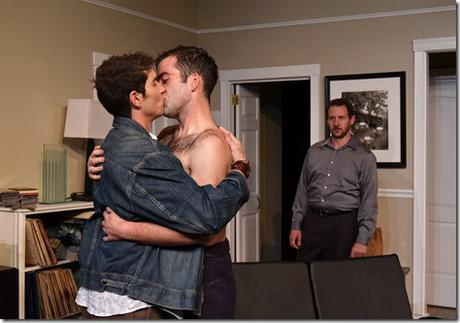 Eclipse Theatre Company ends their Terrence McNally season with “The Lisbon Traviata.” The author of the Maria Callas-centric play “Master Class,” “The Lisbon Traviata” suffers from the Callasitis still prevalent, despite her 1977 death. Whatever may be argued about her voice–did she sing the wrong repertoire, were her choices too divergent, did the fabled weight loss that gave her the opportunity to become a fashionista strip her of imperative breath support, resulting in strident, flat, cracked or even non-existent high notes–she inarguably set a standard for operatic acting that has spurred the art form in the direction of honest and connected characterizations.

Some argue that this is an insider’s play. They claim that if the audience doesn’t know opera that the jokes will get lost. Cloudy exposition will obscure the dramatic trajectory and a distance from the characters will be created that disallows a shared catharsis.

Personally, I don’t consider this a valid squabble. There are always audience members who are unfamiliar with the background of a play. The challenge belongs to the artists who must be so immersed in their characters and their particular vocabulary that an unversed audience can at least discern the gist. There must be a palpable synergy between the page and the player. And, of course, the playwright must be trusted. If there’s a “laugh line,” particularly in the first moments of a performance, the actors must give the audience a chance to contribute, especially if some of the language is mired in operatic Italian. As a rule: faster isn’t always funnier.

In the performance I saw, the Italian pronunciations were garbled and tossed off, the audience’s attempts to laugh were largely ignored and the boil of sexual tension never rose above a simmer.

With a city chock-full of talented actors who know (or will feverishly study) opera for a chance at these extraordinary characters and will fearlessly make spiritual love to any scene partner, irrespective of sexual plumbing, how did this go so awry? (Aaron Hunt)