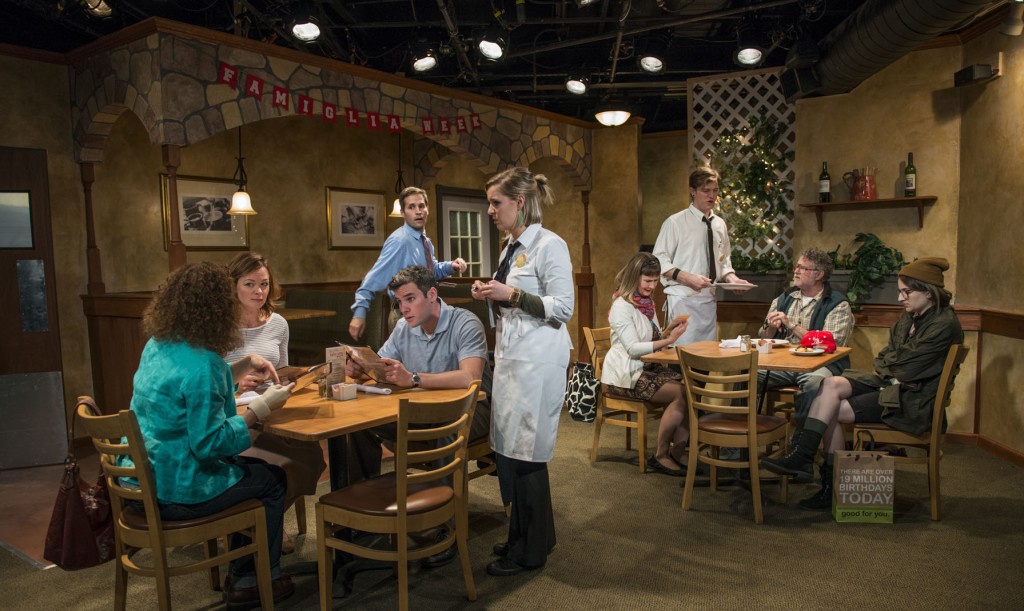 RECOMMENDED
Misery: it’s what’s for dinner in “Pocatello,” MacArthur-winner Samuel D. Hunter’s play about the decline of a chain restaurant in the titular Idaho town. Opening with the familiar din of a family restaurant, cross-conversations drift in and out of focus as the desperate sounds of a dying town become more and more distinct. The cacophony intensifies the pain of failed relationships, willful addictions and callous family members.

Thirtysomething restaurant manager Eddie (Michael McKeough) is hell-bent on winding back the Pocatello clock. He tries futilely to make things like they used to be by gathering his mother Doris (Lynda Shadrake) and out-of-town brother Nick (Sam Guinan-Nyhart) for a meal during his restaurant’s “Famiglia Week.” Doris repeatedly walks away—”I don’t have time for this”—and Nick, who can’t sit still without discomfort, explodes furiously when Eddie tries to serve them “Cheez Whiz Casserole,” a dish made by their father who committed suicide twenty years prior.

Lamenting the colonization of his town by big-box stores like Home Depot, Best Buy, Walmart and Applebee’s, Eddie despairs, saying, “I don’t even know where I live anymore.” Unable to keep these stores from exerting their influence over his livelihood, Eddie is equally incapable of stopping them from abandoning Pocatello. He carries with him the secret fate of his own Olive Garden-esque restaurant and desperately tries to hide it from his employees and patrons.
Around Eddie, stereotypical small-town dramas escalate the sense of hopelessness: Tammy, wife of Eddie’s head waiter Troy (Bob Kruse), visits the restaurant in order to convince Troy that their problems have nothing to do with her drinking; Max (Morgan Maher) has moved from having a serious problem with meth to using it purely recreationally; waitress Isabelle (Allie Long) is in possession of a cheerful detachment which might be the very thing these folks need to survive the death of their town.
As a whole, the play is a touching dirge for the residents of small-town America. “Pocatello” painfully maps the ways in which local and personal context are lost in the gargantuan shadow of corporations. (Joy Miller)
Griffin Theatre Company at Signal Ensemble Theatre, 1802 West Berenice, griffintheatre.com, (773)698-7389, $31-$36. Through December 13.