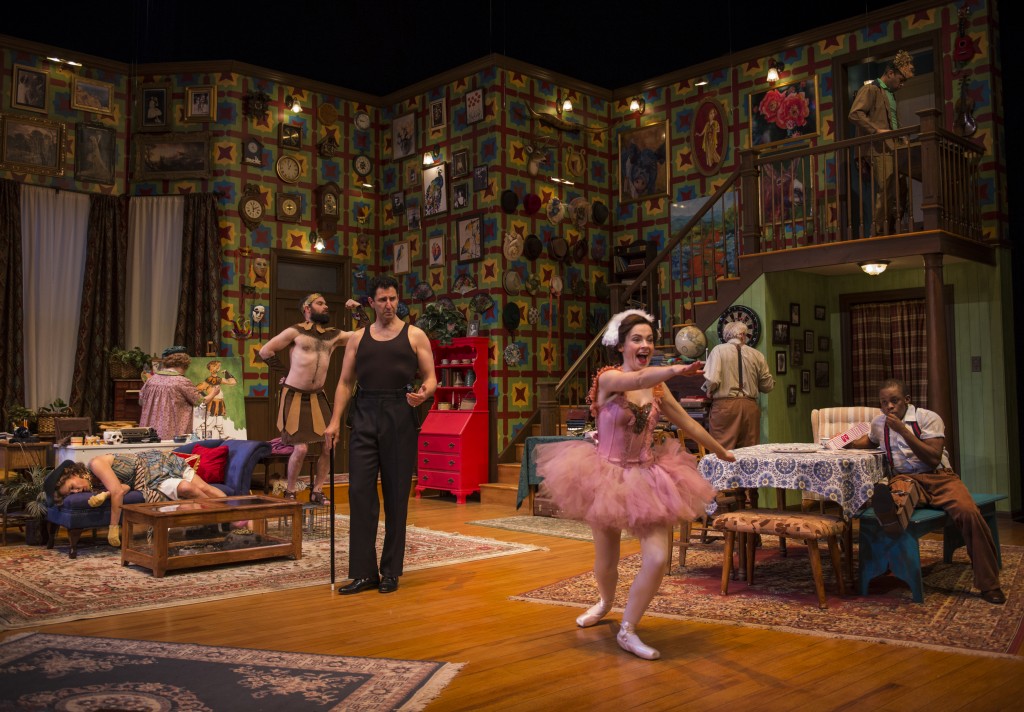 The cast of “You Can’t Take It With You”/Photo: Michael Brosilow

From the program notes of Northlight Theatre’s “You Can’t Take It With You”: “The Sycamore family lives in Morningside Heights, which was a distinctly middle-class neighborhood in New York City’s Upper West Side. A stroll through this neighborhood might not have revealed obvious signs of the Depression.” As far as tone is concerned, the dramaturgy is as right as the production is wrong.

“The Munsters” was a very different television show from “The Addams Family.” The Munsters were oddly dressed and lived in a disheveled home. Meanwhile, the Addams’ home was tidy and most of their clothing was appropriate for the time. If “The Munsters” drew laughs by creating embarrassing personal situations, the comedy of “The Addams Family” was situational, more “us against the world.” If one passed a Munster on the street, they would immediately label them as “other.” Gomez, Morticia, Wednesday and Pugsley, however, might waltz by without notice.

“You Can’t Take It With You” isn’t “The Munsters,” both in the literal and figurative sense here. What is so delightful about this 1936 Kaufman & Hart play is the sudden revelation of eccentricities from characters who otherwise appear “normal.” Director Devon De Mayo, who trusted Neil Simon and gave Northlight a heart-tugging “Lost In Yonkers” last season, didn’t trust Kaufman & Hart. Nor did scenic designer Courtney O’Neill or costume designer Izumi Inaba.

The Depression-era Morningside Heights home of a once-successful businessman ought to look more like that of the Brewster sisters in “Arsenic and Old Lace”: a bit worn, perhaps, but not outrageous. The comedy extends from the situation, not from the appearance. The flamboyant characters of Boris Kolenkhov (Sean Fortunato) and Grand Duchess Olga Katrina (Hollis Resnik) cannot gain “other” status if the family’s clothes and their acid-trip wallpaper (which you can hardly see the actors in front of), scream “eccentric.” Here, the major zanies just blend right in.

“You Can’t Take It With You” claims the unhappy distinction of leading some of the city’s most beloved actors astray. Alas it seems the entire cast was brilliantly playing “The Addams Family” to a director content with producing “The Munsters.” (Aaron Hunt)