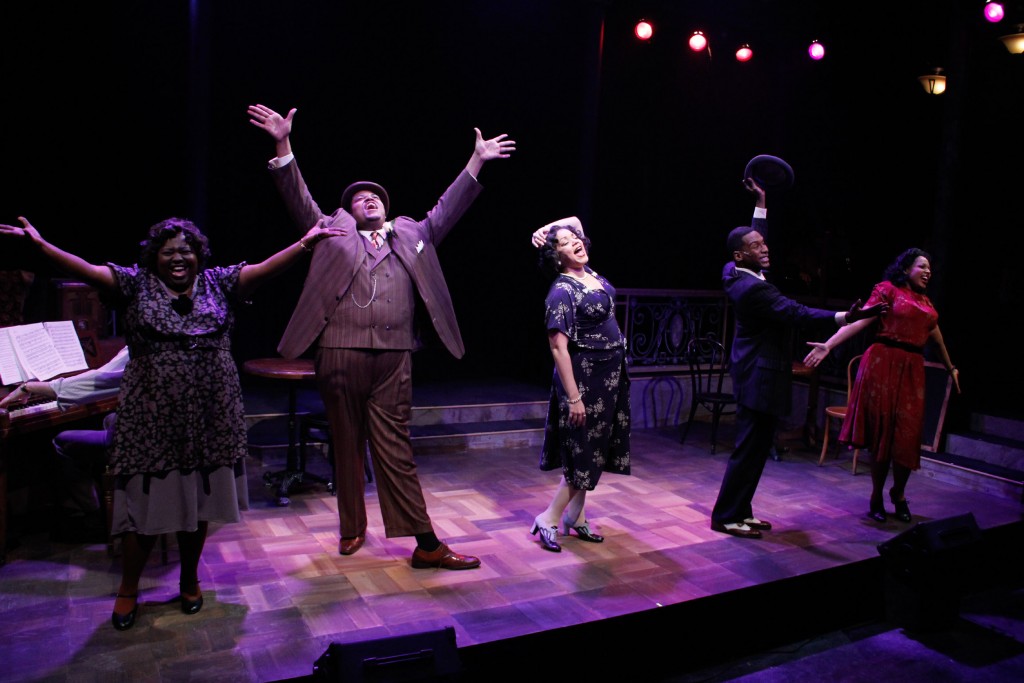 There is something wonderful about watching a musical revue that doesn’t pretend to be more than it is. The folks over at Porchlight know when to let a good thing stand on its own and that’s exactly what they do with their treatment of “Ain’t Misbehavin’.” Director and choreographer Brenda Didier guides her cast through the songs of Fats Waller with little to detract from the tremendous music and dance sequences. There’s not really a plot here and that’s just fine. In fact, if there were any sort of construct upon which these pieces were hung it would most certainly take away from the overall product.

The setting of this play is a basement-level nightclub in Harlem on the night of December 15, 1944. The environs are beautifully rendered by scenic designer Jeffrey D. Kmiec and accentuated with skillful subtlety by Maya Fein’s lighting design. Together, they make this a nightclub you’d actually want to visit. It is a comfortable destination with a good band (headed by pianist, conductor and music director Austin Cook).

Every aspect of this sharp production lends itself toward showing off the five performers who sing, dance and flirt their way through a repertoire that has come to make up a good chunk of the American standards songbook. All five are engaging and skilled. Each has a style all their own that blends well with the others. Lorenzo Rush Jr., a soft yet rich baritone whose derby-topped head calls to mind Mr. Waller himself, is particularly fun. His banter with the ladies of the ensemble lends the show a good chunk of its narrative structure and as an actor he is more than up to the task of driving what little plot there is. He flirts with Sharriese Hamilton’s bubbly young vixen to the chagrin of the woman who came with him (Robin DaSilva). The chemistry between DaSilva and Rush is palpable as they make their way through pieces that oscillate between women done wrong and love that’s just right.

Waller’s music and lyrics are sophisticated and lovely even many decades after their original composition. This production showcases the quality of the tunes with its own high production values. (Christopher Kidder-Mostrom)