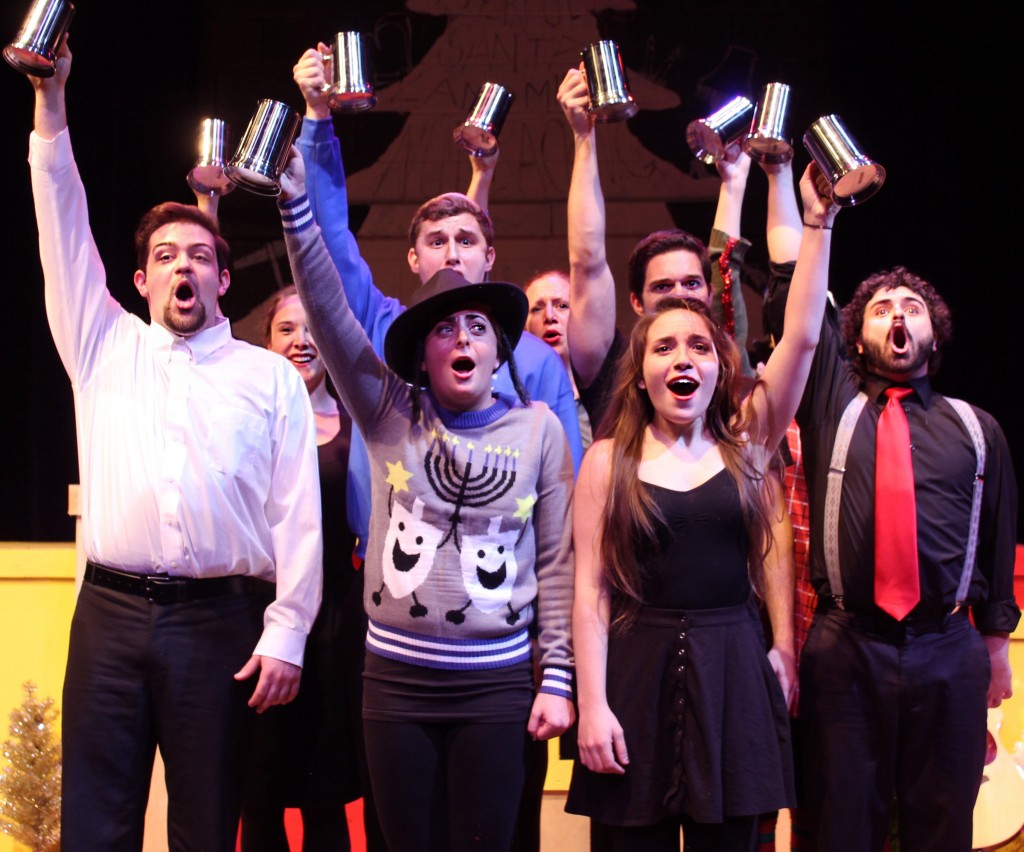 What’s not to like about a holiday show that ushers you to your seat with a freshly made cookie in hand? The spirit that whisks you through the door into the Box Theatre at Stage 773 is relentlessly cheery. The energy peaked just before the scripted show began but the high that filled the house was enough to carry the audience through the clunky first number that stalled out and caused concern that perhaps this ninety-minute holiday revue was destined for lesser things.

That being said, though the production is bookended by numbers that seem undeniably under-rehearsed, the figurative filling in this holiday Hydrox cookie is quite pleasing, especially a sketch about the non-winter holidays, each represented in puppet form. The gathering of protesting personifications is well-penned and equally well-executed. I came away wanting to get myself an Arbor Day mascot.

Marco Braun hosts the evening with homey zeal. He generally keeps the show moving along at a clipping pace. The sharpness of the sketches occasionally suffers as the actors tend to lack the lung power and confidence to make themselves clearly heard. However, when the show is at its best one forgets the little hiccups and rough edges. Particularly good are the dancing sisters, Megan and Teresa Leahey, whose Irish stepdance number makes sibling rivalry seem like something worth cultivating.

At times the writing is incongruous with the age of the performers. There are jokes and references about eighties toys delivered by actors definitely born in the grunge era. Perhaps revisiting the script of this perennial favorite with an editor’s pen might be a good idea before next year’s run. For this year, it is an enjoyable evening of songs and sketches that are generally not going to offend anyone and will likely warm most hearts. The show sticks with you in a good way though you may find yourself wondering why you’re humming “Comanche” by The Revels. Nothing says “Happy New Year” like the rape-scene music from “Pulp Fiction,” right? (Christopher Kidder-Mostrom)