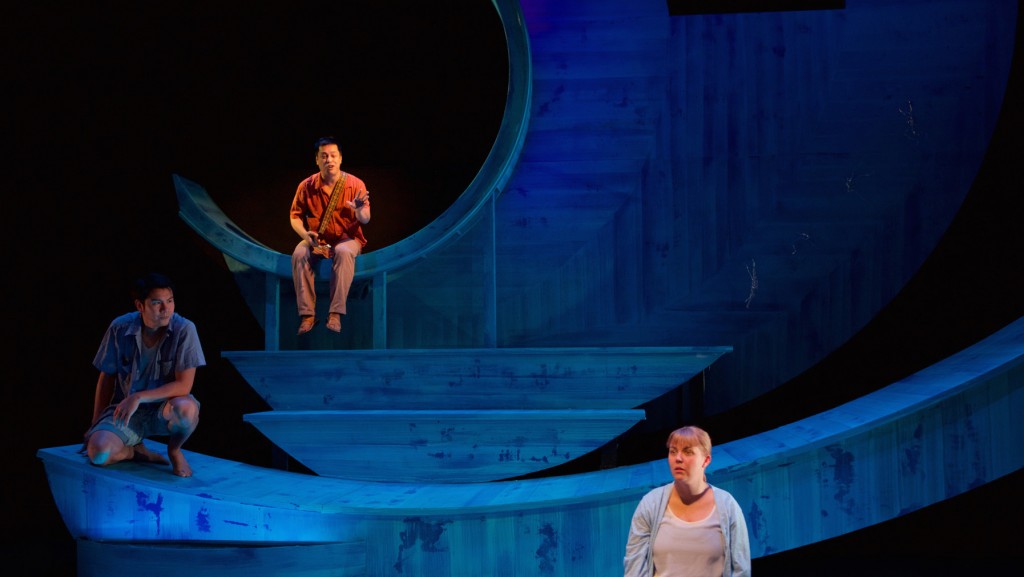 Economy drives creativity. That force is strong in Hansol Jung’s “No More Sad Things,” currently making its co-world premiere with Sideshow Theatre Company. This observation, of course, is not meant to imply cheapness: a gorgeous construction of a giant, Caribbean-blue wooden crescent and risers, poetically lit, occupies the stage at Victory Gardens’ Richard Christiansen Theatre. It is decadent in its own simplicity. Like the three-person cast that adorns it, it does quite a lot without giving too much away.

Jung’s play, as directed by Elly Green, focuses on the two main characters, Jessiee (Katy Carolina Collins) and Kahekili (George Infantado), who tell the story of their meeting and subsequent week together in Maui each from their own perspective. Yet this is not your average boy-meets-girl love story. When Jessiee stomps her foot and demands that they go back and tell the story in order, the audience becomes aware that what they have been witnessing has in fact already happened, a reveal that accounts for the frequent interruption of the narrative by poignant scenes from Jessiee’s relationship with a teenage boy named Benjamin, played by Narciso Lobo.

Besides Jessiee and Kahekili, Lobo plays every other character in the play. He presides over the production like a dynamic chorus, creating sound effects, playing ukulele and providing mood. He is the frog in the dream that inspired Jessiee to go to Maui. He is the man working the front desk of the hotel where Jessiee has decided to go “off the grid” in order to avoid the many harsh realities that have built up in her life.

We watch Jessiee and Kahekili get to know each other in quick successive scenes that range in dimension from driving up a mountain to watch the sunrise to reading on the beach. While these blips lend the characters depth and push the story along, there are moments when this montage-esque texture can feel a little repetitive. This lack of development in the intricacies of the plot is a small but noticeable absence. Yet in moments when the dialogue tends toward the hilarious and dark sadness heaves at the margins, such an absence feels very small indeed. (Joy Miller)