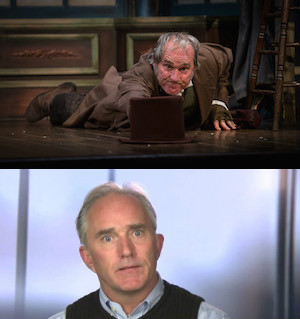 First published in 1843, Charles Dickens’ novella “A Christmas Carol” has since gone on to be one of the most popular Christmas stories of all time. Furthermore, it has proved to be surprisingly adaptable to the stage and screen. To honor Dickens’ legacy and usher in the holiday season, I sat down with actor Ron Rains and his alter ego, film critic Peter K. Rosenthal, to talk about the lasting impact of the story, mercy and capitalism, and which Ghost of Christmas would win in a three way free-for-all.

Ron, this is now your ninth year in a row playing Bob Cratchit at the Goodman. What’s changed between the first time and now? What’s new for Bob and for yourself?
Ron: Yes, it’s my ninth year, which makes my tenure as Mr. Cratchit the longest in the Goodman’s history. There’s a comfort to the role now. Bob is an old shoe I’m lucky enough to slip on every November. And every performance is new. It’s absolutely true that every performance is different, as every audience is different. I try to be as present and open as I can be and experience Mr. Cratchit’s track new and fresh each time.

What’s new for me is that I’m newly wed. I got married in July to my longtime partner Maura Kidwell and we’re very happy. We’ll be honeymooning in Ireland after “Christmas Carol” closes.

Do you ever fantasize about switching roles with Larry Yando at the last minute and seeing how he likes having to be optimistic and cheery all the time?
Ron: Larry is an amazing actor and I’m lucky to call him a friend. Being onstage with him is a master class. We just closed “The Tempest” at Chicago Shakespeare Theater together. If you missed his Prospero, you have done yourself a disservice. Larry maintains a personae that can be intimidating to some but he is really a kind and generous man. Being optimistic and cheery isn’t something novel for him. He is a master craftsman and knows exactly what tools he needs in order to convey his character’s arc to an audience.

Peter is a pretty accomplished, although entirely uncredited, filmmaker. If he was filming a version of “Christmas Carol” would you be in it?
Ron: Oh sure. I’d love to. I mean, he’s had his hands in everything, film-wise. Did I actually hear that Christopher Nolan stole your idea for “Interstellar,” Peter?

Peter: Look, I can’t get into it any more than I did in my review of “Interstellar.” I don’t have high-powered lawyers to defend my interests. All I can disclose is that I put nearly a decade of my life and nearly $150 million into that movie, and I clearly made a mistake by lending him my one DVD copy of it. So, look, if Nolan is somehow out there reading this, I’ll just say this: Chris, you’re a great director. You don’t need to steal my movies. You can make your own. Just let me have the credit for “Interstellar” and “Inception ” back. 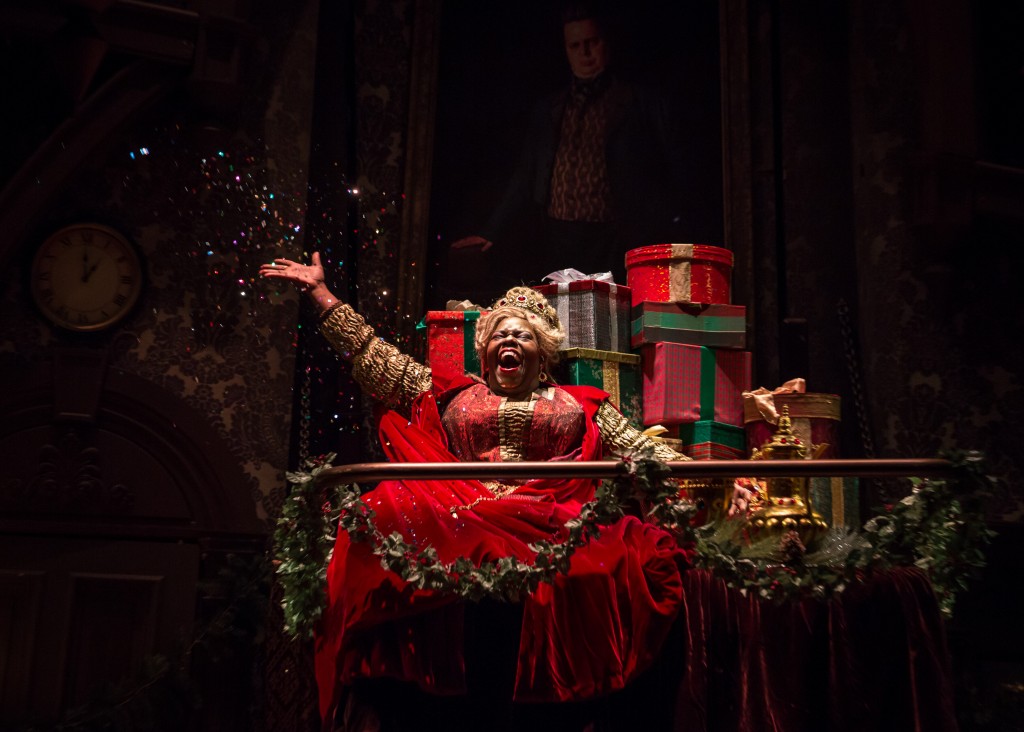 Do you see much theater, Peter?
Peter: No, I have never seen a stage play. Music, books, art, theater: I’ve never experienced any of these things. I’m a film critic. Everything else would just distract.

“Christmas Carol” has been adapted dozens of times for film and TV. Do you have a particular favorite version?
Peter: Unfortunately, I’ve never been able to appreciate any version due to the story’s somewhat childish message, which teaches us that through hard work and compassion alone that a person can live a happy, honest life. Personally, I don’t know what kind of dreamworld Dickens was living in but let me assure you, as a man who has devoted the past thirty-five years of his life to reviewing countless reboots, prequels and remakes of movies just like “A Christmas Carol,” I know there is neither hope nor joy left in this world.

In your professional opinion, how does “A Christmas Carol” rank against other Christmas movies?
Peter: Well, we can figure this out using my patented reviewing method: the twelve-point Rosenthal Scale. For example, the 1938 adaptation of “A Christmas Carol” receives a basic score of 6.82, which can then be run through the Ziegfeld Theorem, inputting such variables as the film’s runtime, a logarithm of box-office revenue and the number of cars visible on-screen. Solving for X, we receive the yield of 227.79, which of course computes to a final Rosenthal score of 6.32. Compare this to “Miracle on 34th Street”‘ at 6.33, and “It’s A Wonderful Life,” which has a Rosenthal score of -732.51.

That’s very insightful, Peter. This is for both of you: what do you think it is about “Christmas Carol” that’s made it so lasting?
Ron: William Brown was the first director I worked with on “Christmas Carol.” He initially cast me as Bob Cratchit, bless him. Each year, he would lead the cast in a discussion about how Dickens’ story is needed more every year and that remains true today. The vilification of the poor, the reluctance of so many in society who have so much to relinquish any bit of aid and comfort to those who have so little is prevalent in campaign speeches and “news” programs you can hear today. The fact that billionaire politicians today can, with a straight face, suggest cuts to programs specifically for those less fortunate is exactly what Dickens was writing about in 1843.

Peter: The unstoppable, churning wheels of capitalism. “A Christmas Carol” is a solid investment for theaters, returning year-over-year revenue increases. I can see no other reason a director would stage this play.

Lastly, in a three-way melee between the Ghosts of Christmas, who would win?
Peter: As the hero of “A Christmas Carol,” theatergoers are obviously always rooting for the Ghost of Christmas Yet-To-Come. In fact, I can’t help but feel somewhat let down that the enduring spectral protagonist is never able to accomplish his one true dream of destroying the bumbling Cratchit, Tiny Tim and the rest of his family. That’s really what makes the story such a tragedy.