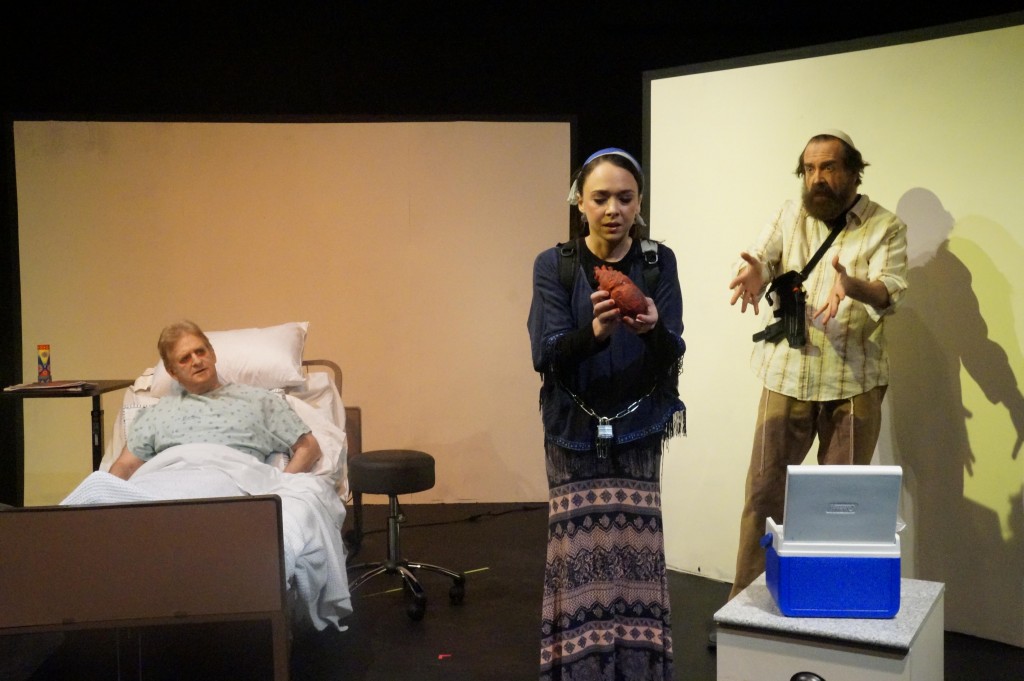 The Hebrew word hasbara literally means “explanation.” But to modern-day Israelis it connotes something more like spin: the massaging of facts or almost-facts into propaganda for the benefit of an outside world seen as implacably hostile and pitifully ignorant. Israeli playwright Michal Aharoni’s “Angina Pectoris,” receiving its world premiere here in Chicago, is a satirical exploration of the hasbara universe, where all psychic energy goes toward rationalizing one’s own meshugas and furiously denouncing everyone else’s. While ShPIel’s rough production of this not-quite-finished play is no comic masterpiece, its head and heart are very much in the right place.

Which is fitting for a play that allegorically depicts Israel as a nation experiencing heart failure. The older generation is personified by Israeli Defense Minister Dan Yasour (Gary Saipe), a tough old bird who will die within days unless he receives a heart transplant. Problematically, he is the very same demagogic politician who passed a law forbidding the replacement of Jewish body parts with their goyische equivalents.

When a young Arab heart becomes available to Yasour and his preening, liberal cardiologist Dr. Gal (JP Thomas), Yasour’s daughter (and Gal’s ex-heartthrob) Masada (Katie Sherman), who’s engaged to an Uzi-toting wingnut (David Edward Smith), sniffs the Arab otherness of the heart muscle and insists that her father comply with his own racial purity law. Underneath the absurd premise there is timely dramatic conflict between divisive ideology and unifying compassion; the petty theatrics of politics and the immutable truths of life and death.

“Angina Pectoris” certainly leaves something to be desired. The set is shabby and the actors mug shamelessly. Director David Chack (ShPIel’s artistic director) plays Aharoni’s needling satire as broad farce. Yet the cardiac theme is provocative and universal, transcending the inside-baseball quality of the jokes. The play’s finest scene is also its least funny: Masada confronts the donor’s father, an embittered Palestinian, who now wishes to take back his son’s heart. “He’s all I have,” pleads Masada, who, for the first time, sees the Arab in front of her not as an abstraction but as a mirror of her own vulnerability. Here, hasbara is transformed into self-awareness. This moment of communion and hope makes the whole play worth seeing. (Hugh Iglarsh)