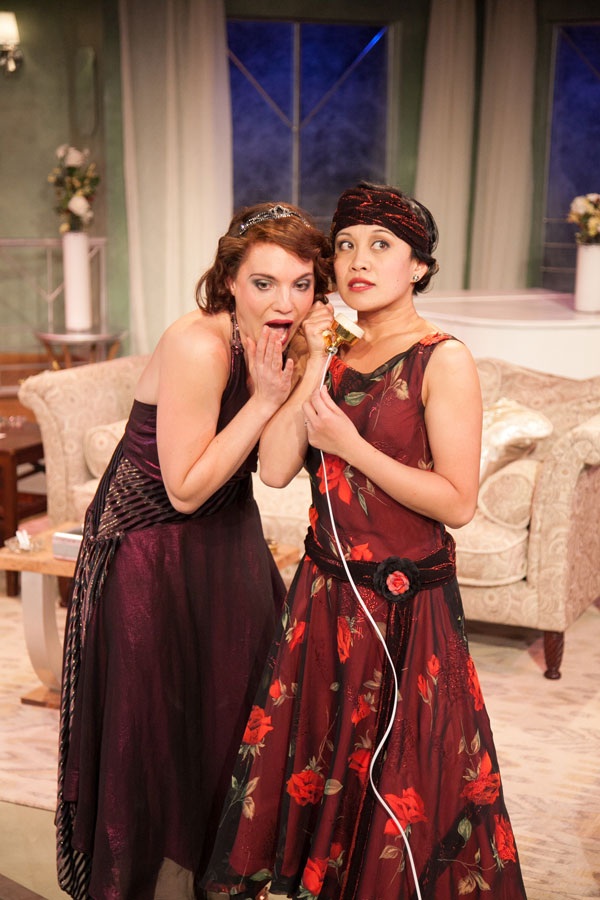 Simultaneously charming and edgy, snobby and subversive, frivolous and thought-provoking, Noël Coward’s “Fallen Angels” is a delightful feast of contradictions. Coward’s satirical assault on the sexual double standard was deemed so corrupting that it was banned after its publication in 1925. In director Shannon Cochran’s capable hands, his tale of well-bred–and married–London girls gone wild has lost none of its bawdy irreverence.

At the center of this Jazz Age parable are Julia (played by the lissome Emjoy Gavino) and her bosom friend Jane (portrayed in suitably high-strung fashion by Eliza Stoughton). Married to interchangeable golf-playing husbands (Fred Geyer and Jesse Dornan, respectively), both women are experiencing a marital five-year itch, described by Julia with a more-or-less straight face as the shift from initial passion to “the sublime plane of affection and comradeship.”

This creaky Victorian concept of domestic bliss, premised upon a sexless, self-sacrificing angel of the household, goes out the window the moment the women hear that their mutual old flame Maurice is in town. The drawing-room comedy segues into a prolonged drunken cat-fight as the women egg each other on toward most unladylike displays of unbridled lust and violent sexual rivalry.

What keeps the show funny is the Cowardly artifice of it all. The women self-consciously perform their own lives, relishing the scene-stealing dramatic potential as they alternate between eye-rolling ecstasy and tearful misery. More sharply than any suffragette pamphlet of the period, Coward shows the plight of women trapped in male-defined relationships, made bearable only by adulterous fantasy. Cochran wisely pitches the performances just at the edge of hysteria, thus underscoring the deadly boredom behind the opulent exterior.

Costume designer Janice Pytel deserves her own round of applause for the flowing flapper gowns of the overdressed and under-occupied gal pals. But the largest hand goes to the redoubtable Annabel Armour as the maid Saunders, a Jeeves-like creation whose serene intelligence, sanity and competence contrast markedly with her masters’ panicky befuddlement. Armour’s lovely dramatic pauses are the star atop this glittering Christmas tree of a play. (Hugh Iglarsh)