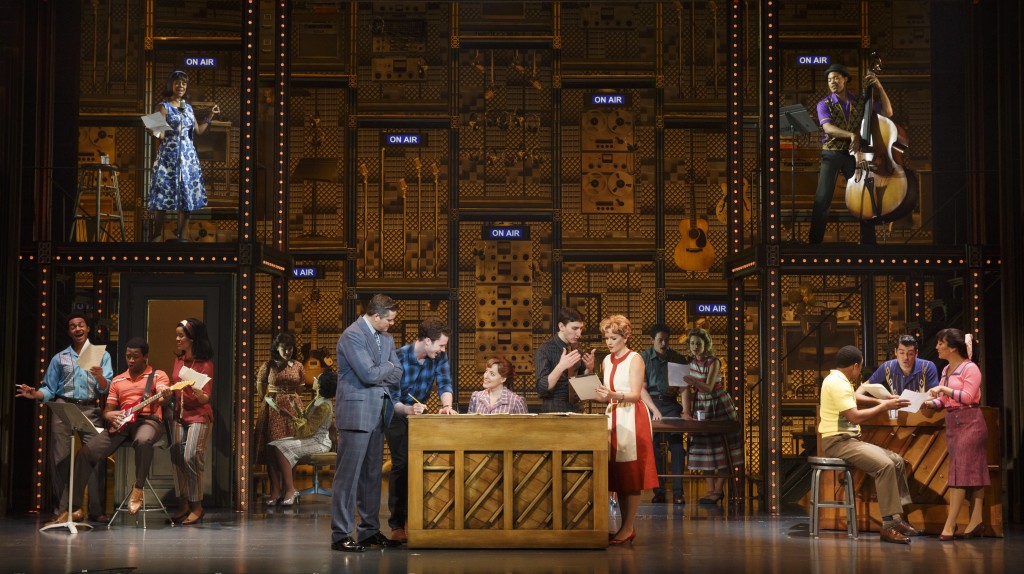 What do the songs “The Locomotion,” “Take Good Care of My Baby” and “It’s Too Late” all have in common? Aside from being number-one hits, they were all penned by Grammy Award-winning singer-songwriter Carole King. The first two–along with a slew of others–were co-written with King’s ex-husband Gerry Goffin. However, King is a legend in her own right and “Beautiful: The Carole King Musical,” directed by Marc Bruni with musical direction by Susan Draus, explores why.

At the top of the show, the audience is introduced to a young King (played by Abby Mueller, a spot-on King, especially when singing), who, at age sixteen, was a talented pianist developing her passion for songwriting. By the time King was seventeen, she was married and pregnant with her first child. She also had her first number-one single, “Will You Love Me Tomorrow,” co-written with Goffin (Liam Tobin).

The “1650 Broadway Medley” encapsulates the magic and madness of the hit factory where King and Goffin thrived. The couple became good friends with another songwriting duo–Cynthia Weil (Becky Gulsvig) and Barry Mann (Ben Fankhauser)–who co-wrote songs like “You’ve Lost That Lovin’ Feelin’” and “On Broadway.” “Beautiful” highlights their unique friendship and competitive spirits as the duos fight to top the charts and please music publisher Donnie Kirshner (Curt Bouril). While the first act sets much of the groundwork for King’s solo career, the second act is truly her coming-out party, as she writes and performs hits that she wrote and composed including “You’ve Got a Friend” and “Beautiful.”

The set (designed by Derek Mclane) and costumes (Alejo Vietti) transport the audience back to each decade of King’s life up to the release of her critically acclaimed and most well-known solo album, “Tapestry.” Though these songs might be hard to stop singing along to long after the lights go down, this is more than another jukebox stroll down memory lane. “Beautiful: The Carole King Musical” is the story of how a woman came into her own and helped others do the same. That truly is some kind of wonderful. (Mary Kroeck)