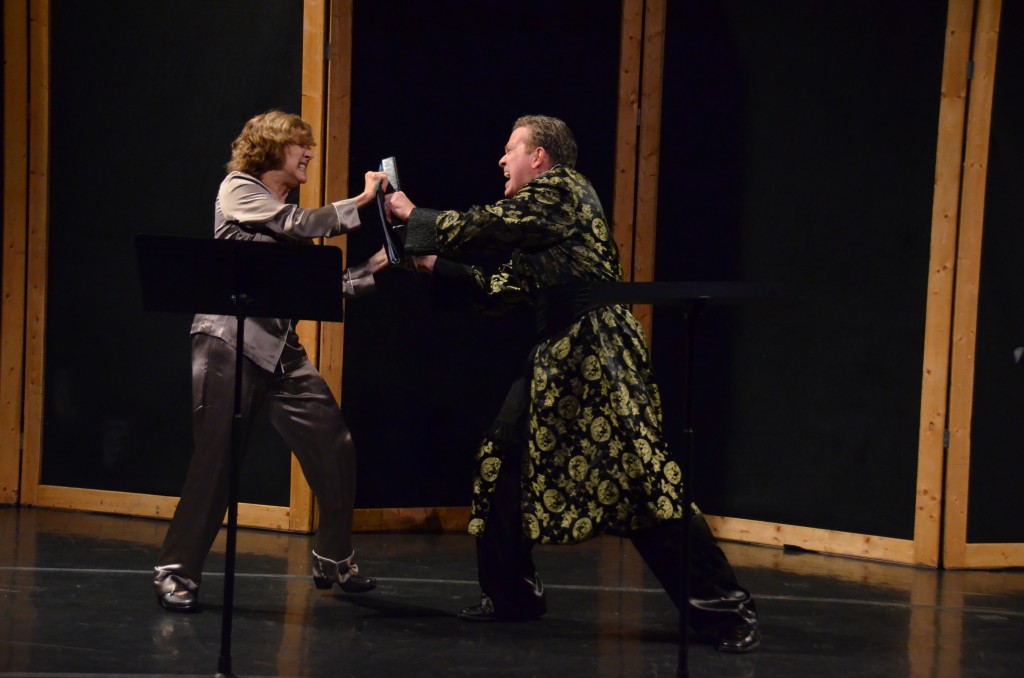 Written almost ninety years ago, Nöel Coward’s comedy “Private Lives” explores the undiscovered country of couplehood where the heat of love can sometimes burn with hate. The play begins with former spouses Amanda (Mary Michell) and Elyot (Michael Lasswell) at the same seaside hotel though on separate honeymoons. This coincidence causes a nasty row for both couples as Amanda and Elyot drive their new mates away with their over-the-top antics. Over cocktails, the former lovers rekindle their romance and impulsively flee together to begin anew. Their jilted spouses pursue them and the resulting mayhem culminates in a reevaluation of love’s true nature.

The big surprise in this production comes with the set design. There is none. “Private Lives” is presented by ShawChicago as a concert reading. The actors are mostly rooted behind the music stands that hold their scripts. This setup works well for the more cerebral first act but has difficulty supporting the physical action that follows. Watching two actors on stage knock binders back and forth is a poor substitute for the manic fight the script seems to demand. Director Barbara Zahora does manage to coax more than a few laughs from the material, but not as many as she might have with more traditional staging.

At the same time, the actors are talented enough to make this an enjoyable production. Lasswell’s Elyot is a biting, jealous man who can be quite funny in that dry, Londoner way. Coward wrote the role for himself and this characterization offers, I suspect, more than a little insight into the playwright’s personality. Opposite Elyot is the manipulative and flighty Amanda (played perfectly by Michell) who excels at trading both verbal and physical blows with her ex-husband. Their respective spurned partners are wonderfully embodied by Leslie Ann Handelman (who can cry hysterically with the best of them) and Doug MacKechnie, who plays a humorless English gentleman.

Although “Private Lives” was born to a world where a line like “certain women should be struck regularly, like gongs” was considered more clever than shocking, the play as a whole does not feel dated. Rather it seems to tap rather nicely into our modern, less static notion of love. (Noel Schecter)