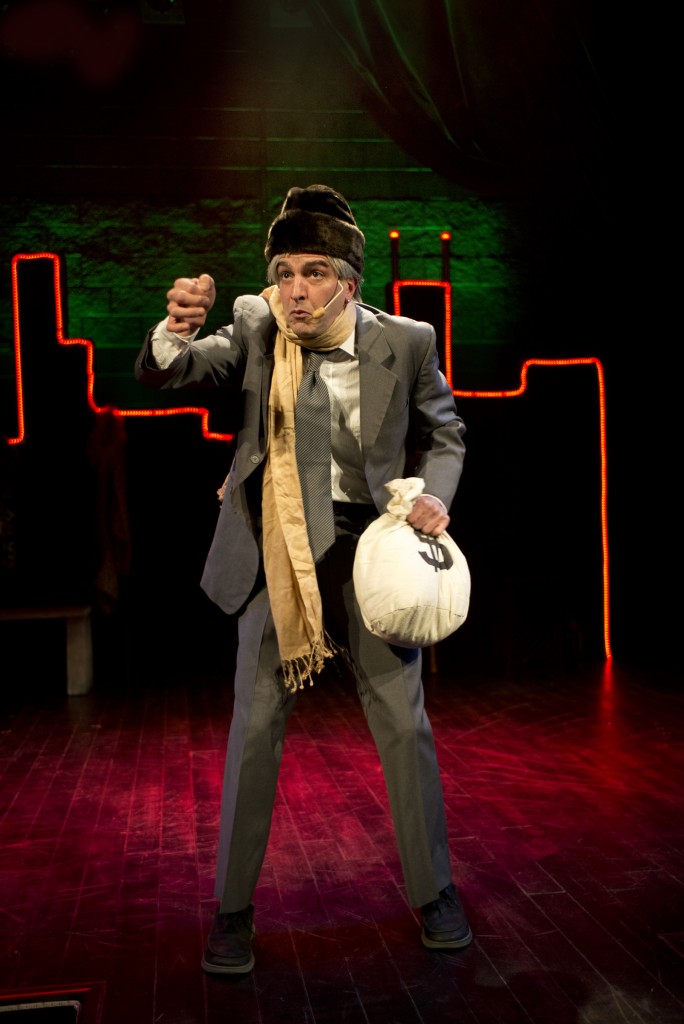 ‘Tis the season for tradition and “A Q Brothers’ Christmas Carol,” now in its third year at Chicago Shakespeare Theater, is easily on its way to becoming just that. Mining the Dickens classic for parody, the show still manages to let some of the original’s sentimentality flow such that when Ebenezer Scrooge has his anticipated change of heart toward the play’s end, the audience lights up with the emotional payoff that comes from witnessing redemption.

Up until that point, viewers are sure to be tickled by the novelty of seeing such a familiar tale transformed into a modern hip-hop mash-up. Jacob Marley is damned to a hell of reggae music. Scrooge’s nephew is obsessed with “three words, four syllables… CHARADES ALL NIGHT!” while his nephew’s boyfriend uses hashtags like ubiquitous prefixes. While none of this is news to anyone who has seen the production in past years, the delightful modifications in this year’s performance (such as digs at Donald Trump) keep this Q Brothers’ tradition from becoming outdated.

The production moves swiftly and explodes with clever puns and rhyming jokes. Doubly impressive is the fact that the writers also comprise the cast (GQ, JQ, Jackson Doran and Postell Pringle) and do not want for wittiness in their writing nor in their delivery. On top of this, GQ’s solid performance as Scrooge is not to be missed: he deftly maneuvers a highly refined physicality in order to transform into various versions of Scrooge. JQ boasts his own impressive performance of the excessively pathetic Tiny Tim in addition to his other roles as Marley, Belle and the Ghost of Christmas Present. His switching back and forth between roles is fodder for much hilarity.

Much of the humor put forth in this show, however, is safe and falls neatly within partisan lines, feeling a lot like a longer sketch from a Christmas-themed SNL episode. Of course, in the dark months of Chicago’s winter, who doesn’t want something that is highly entertaining and easy to digest? (Joy Miller)