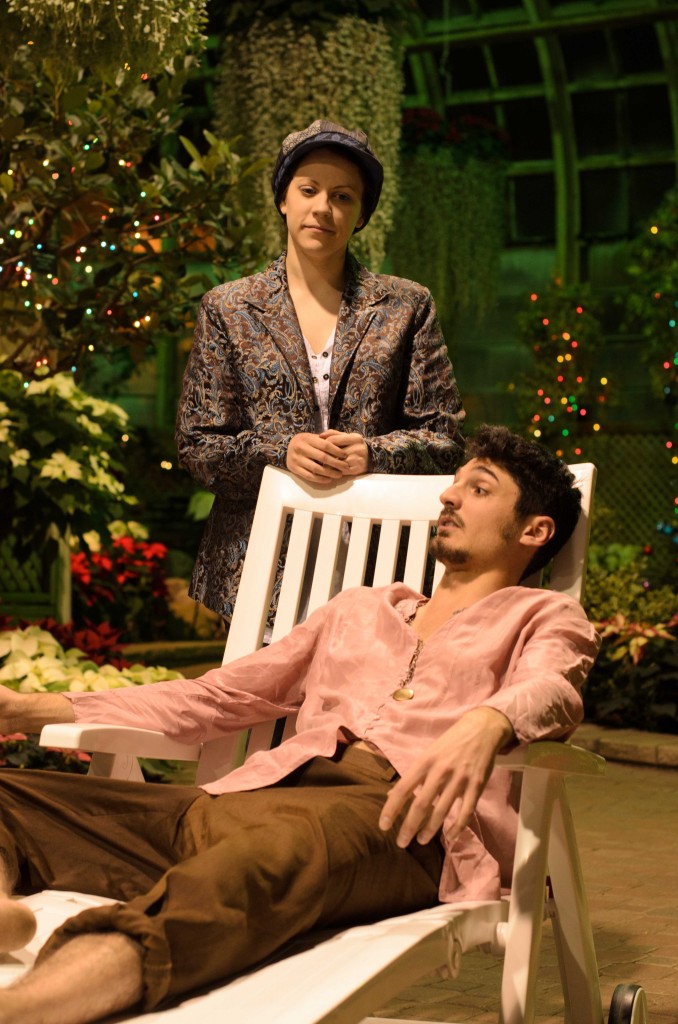 Visually austere, acoustically clean, aromatically alive, the Lincoln Park Conservatory makes a fine setting for Shakespeare’s most sensuous and musical of comedies. When the lovesick Count Orsino (a languorous Nick Loumos), smitten by the beautiful but prickly Countess Olivia (the striking Kanome’ Jones), rhapsodizes about “the sweet sound that breathes upon a bank of violets, stealing and giving odor,” viewers need just inhale to understand his distracted state of mind.

With this production, Midsommer Flight marks its arrival as an artistic force. Using the simplest of means, this youthful, talented troupe opens up a world of pleasure in Shakespeare’s poetry and insight, while never pandering to the audience.

The main plot, with its separated twins and mistaken identities, is ancient and generic. It is the downstairs subplot, in which servants and hangers-on scheme against Olivia’s steward, the officious Malvolio, that is Shakespeare’s own invention. The interwoven storylines, balancing romance with groundling-pleasing farce, is presided over by the fool Feste, the commentator who looks upon human nature with a cool artist’s eye.

Every “Twelfth Night” stands or falls upon the performances of Viola, Feste and Malvolio. Although her scrunched, hands-in-pockets posture doesn’t quite work as a sign of feigned masculinity, Meredith Ernst conveys the resourcefulness and masked passion of the gender-shifting Viola. And while Alex Mauney’s Feste could use a dash more impish irony, his voice and guitar work are exemplary, especially in the haunting “O Mistress Mine.” Jared Dennis nails the role of Malvolio, creating a portrait of the cakes and ale-hating Puritan that is pompous perfection.

For all the love that blossoms and laughs that sparkle in Beth Wolf’s flowing, dreamlike direction, there is a sadness that grips every character. When Malvolio vows his revenge on the pranksters, it feels like a golden age is ending. His anhedonic, proto-corporate personality is the model of the modern man, and in laughing at him we are laughing at ourselves. “Twelfth Night,” with its breadth of spirit and fecundity of wit, reminds us of how much joy and feeling has been shaken out of the world since Shakespeare’s time. It’s a valuable lesson, well taught here, and I for one hope this becomes an annual holiday tradition. (Hugh Iglarsh)