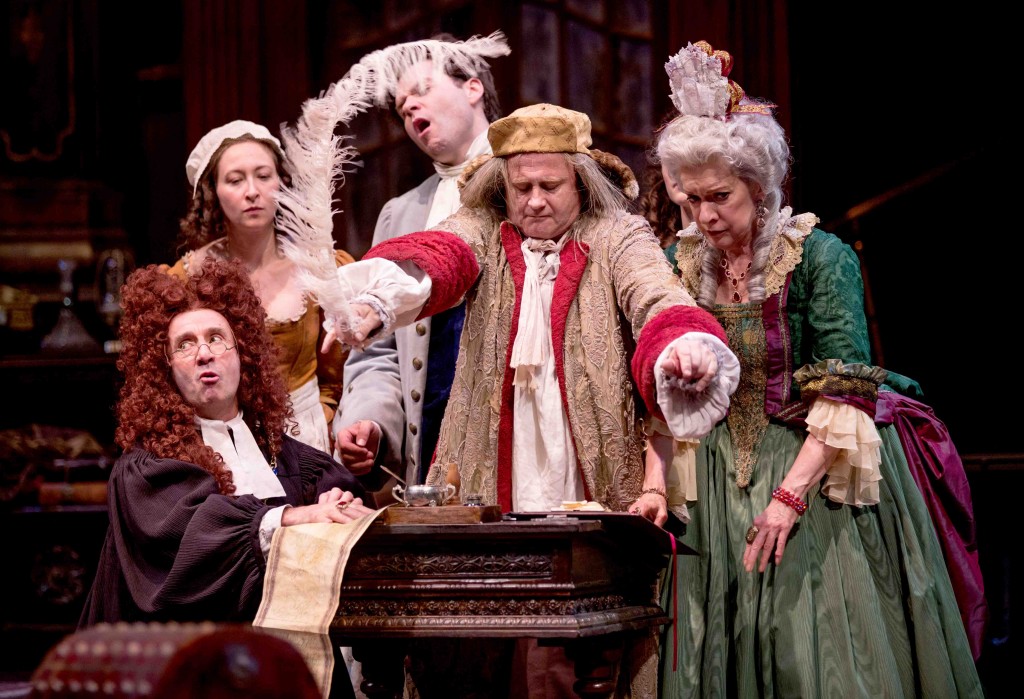 “Is this some new genre?” whispered my companion about David Ives’ verse adaptation of Jean-François Regnard’s eighteenth-century farce, “Le Légataire universel.” Perhaps Pomo Eroticism would be the apt label for this romantic comedy that is perpetually ingenious but neither genuinely romantic nor pointedly funny.

All the pieces are there–a seasoned cast with Rolex timing, a gleamingly polished script overflowing with clever wordplay, an eye-popping set (designed by Kevin Depinet) that soars and stretches like a plywood Versailles–but nothing really comes together or matters much in Ives’ gag-fest, which translates Gallic wit into sitcom schtick.

To be fair, it’s not easy to stage a script consisting entirely of rhyming couplets, which means that natural dialogue isn’t possible and all the characters sound the same. Still, one wishes that director John Rando had found at least a moment or two of living, breathing drama within the “Christmas Carol”-like tale of an aging, ailing miser who ultimately (and implausibly) learns the error of his avaricious ways. But the needle here swings from cynicism to sentimentality, rarely pausing in the zone of feeling.

The performers–Nate Burger as the titular ne’er-do-well nephew of the old buzzard (played by the commanding Paxton Whitehead), Emily Peterson as the ingénue, veteran Linda Kimbrough as Peterson’s grasping maman, Jessie Fisher and gifted physical comedian Cliff Saunders as the standard-issue canny servants and Patrick Kerr as the midget lawyer and comic foil–tear into their iambic parts with an admirable mix of gusto and precision. However, when every character is more mercenary and selfish than the last, it’s not easy to maintain one’s interest over the course of the play’s two-plus hours. And Ives’ habit of taking every joke straight to the chamber pot doesn’t help.

An anti-materialist message is tossed in at the end but gets lost in a production that epitomizes spectacle and conspicuous waste. In classic postmodern fashion, this production pretends to critique that which it is a part of for the benefit of an audience that wants it both ways. The result is a show that, for all its flawless technique, evaporates from memory the moment the curtain comes down, leaving behind only the question of why such extravagant means should be devoted to such limited ends. (Hugh Iglarsh)