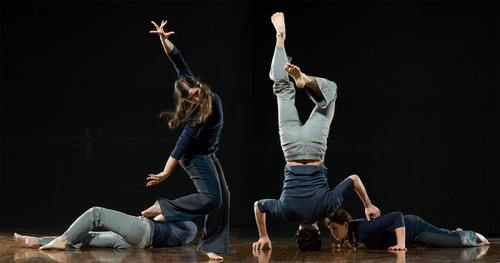 As part of Links Hall’s Midwest Nexus Touring Initiative, the upcoming “Ring Sour” performance brings San Francisco touring company Blind Tiger Society to Chicago to perform in a double bill with Julia Rae Antonick and Jonathan Meyer of Chicago dance collective Khecari. Their “Orders from the Horse” represents a continuance of Meyer and Antonick’s duet-intensive collaboration, “both equally choreographing, directing, and performing, with live improvised music by long time collaborator Joe St. Charles and lighting by Rachel Levy.” Continuing their experimentation with somnolent states, Khecari, which offers the audience the choice of a thirty- or 200-minute performance, plays with the notion of movement in states resembling, for instance, the negotiation of dark hallways of a home in the middle of the night. Blind Tiger Society’s “Dressage” performs what artistic director Bianca Cabrera refers to as a “re-wilding” of the body, using contact and improvisational techniques as tools in the effort. Together, the night’s dual billing offers fans of dance and performance an anticipated evening of cutting edge play in the lines between the two. (Michael Workman)