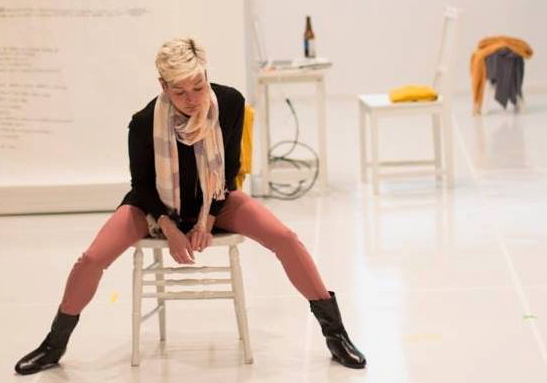 Victoria Bradford choreographs a new dance, video records it, distributes it over social media, and produces a movement notation record and image archive of it…every day. I first became enamored with her antic, aspirational work after a studio-visit introduction, completely incidentally, on a day out with my friend and former dance journalist, Sarah Best. Diagnosed with bipolar disorder, this dancer’s “Neighborhood Dances” project reminds me of an important schism in the discussion of movement: its inevitable inertia. Her project seems to outline in dance the beginnings of inequality, occurring at the moment where someone drew a line on the ground and claimed it as their own. At times, Bradford has engaged in criminal trespass to present her dances, and in so doing protest “occupied” land for dance, performing to a music viewers never hear. Her original motivation: a need for a place to dance when all she had was her parents’ garage.

How did you first become interested in dance as an activity purely for enjoyment? Where did dance come from for you? A lot of people say, ‘Oh, I’ve been dancing since I was three.’
I guess dance as an artistic practice… yes, I did dance when I was three, then I stopped dancing when I was thirteen because I wasn’t going to be a dancer, I was going to be a Smurf or something. I was going to be an intellectual, I pursued an academic career and ended up taking a circuitous route to pursue an MFA in studio art at the School of the Art Institute where I was making videos and someone told me that the work was dance. I was like, “No it’s not,” because it didn’t look and feel like what I used to do when I was thirteen, it doesn’t follow those rules. And so they gave me some examples, things to look at and think about and I followed up with some research and I thought, “Okay, maybe I can call this dance!” But it has been a struggle to think about the work as dance until more recently. It has taken me a good six years to embrace that idea, but now it actually is fun to dance, funny enough, whereas it wasn’t when I was a child; it was always something to get better at because I wasn’t good enough. Now it’s something I can have fun with because I’m working with meaning, with a certain kind of virtuosity that isn’t prescribed to me by these techniques and conventions that were laid out for me by my dance teacher when I was young. I can actually invent something and that’s exciting. I think the best creative and intellectual endeavors are the ones you can also have fun with. So I get to be intellectual and have fun with my craft, and that craft is dance-making.

Who are some of your most influential practitioners and key concepts or ideas that critically inform your work?
So clearly my influences haven’t always been dance-related. When I first started thinking about dance as a result of coming out of sculpture, as well as having done a lot of theater as a child, I really appreciated Pina Bausch, just for her visceral theatricality, color, staging, the way that bodies carry emotionality. Some people think it’s sometimes too much, but I really connect with it as an audience member. I also really appreciate, on a more conceptual level, Meg Stuart’s work. I think she does interesting things with space, she treats the body sculpturally and that’s something I strive for. I spent a lot of time with her writing about the body; how she taps into the desires of the body, and sort of turns up the volume on the body is something I relate to. But I also did a lot of reading in my studies of anthropology and theology in my undergraduate work; I was a fellow in comparative literature for two years and did all of my research on epistolary writing, and so the idea of call-and-response and of letter writing has a strong influence in my work, and the idea that a letter can have this idea of intimacy and touch, and that we can create that same kind of intimacy in dance. That’s part of why I like to work in close quarters and in non-traditional relationships with audiences, and with text and especially text that’s written in such a way that it’s more of an address to an audience or to a particular person in it—to an individual, so that people feel a one-on-one connection with the speaker.

More info on Victoria Bradford can be found at neighborhooddances.com