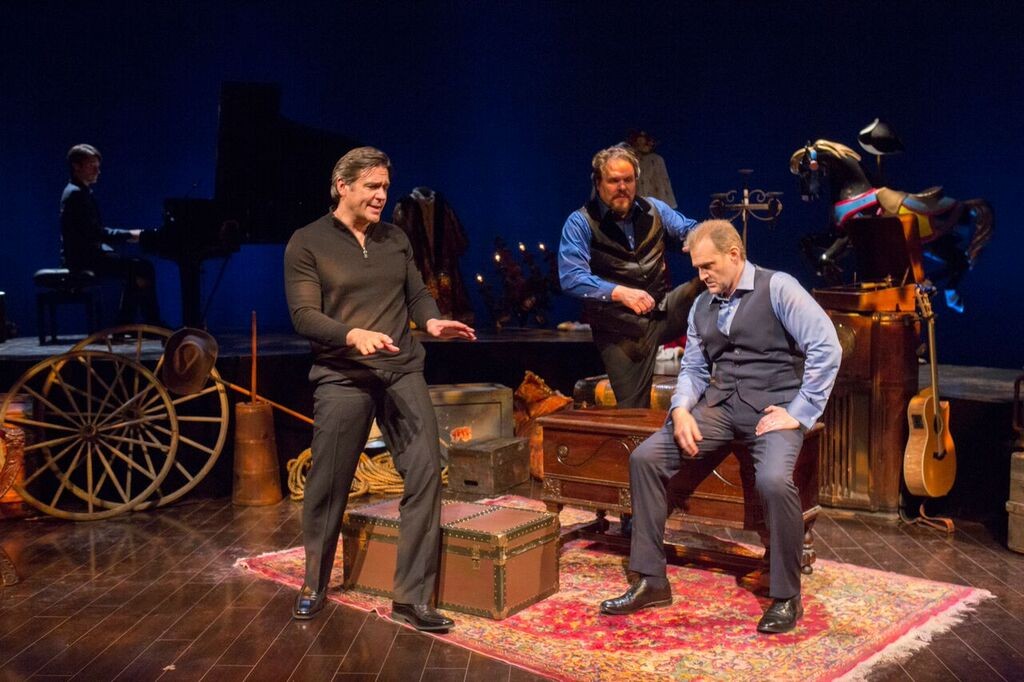 Public safety announcement: baritones are endangered! Or maybe you, yourself, are a baritone and already knew that baritones have been relegated to revival shows as their contemporary roles dwindle? If you didn’t know this, you would do well to catch up on your musical history with “Baritones Unbound,” a show that covers approximately thirteen-hundred years of musical history, focusing on the baritone, in a little less than two-and-a-half hours.

I promise this won’t feel like history class. Instead, it’s like hanging out with a few of the guys waxing poetic about the good ‘ole baritone times while intermittently blasting you with overwhelming snippets of famous baritone roles from operas, musicals and pop music.

These baritones are such bros that they bust out an everlasting bucket of brews to nurse at the start of the second half of the show which begins with “Soliloquy” from Rodgers and Hammerstein’s “Carousel.” The set even looks like someone’s man-cave, albeit one of a well traveled, highly cultivated gentledude. Along with an array of curiosities like a standing tube radio, allusions are strewn about the stage: there are wagon wheels from “Oklahoma!,” a pirate hat from Penzance and a carousel horse from, well… you know.

But as much as Mark Delavan, Nathan Gunn and Marc Kudisch succeed in appearing as common men with their joviality and agile physical humor, the instant they open their mouths to sing—whether it’s Verdi, Gilbert and Sullivan or Elvis Presley—the concept of common disappears. Instead these gentlemen transport us, with their barreling voices, to the lofty space between heaven and earth, where they claim the baritone resides.

This is all highly entertaining, sure. But to be totally honest, my eyes involuntarily rolled in the first few minutes of the show when I thought, “Great. Another show with an all-male cast.” The recent shortage of baritones in pop culture seems to coincide with significantly shifted concepts of gender—smooth, womanizing Sinatra no longer being the pinnacle of manhood. But this show proves that there is still plenty of room for gushing and unabashed celebration of the male (baritone) voice. (Joy Miller)