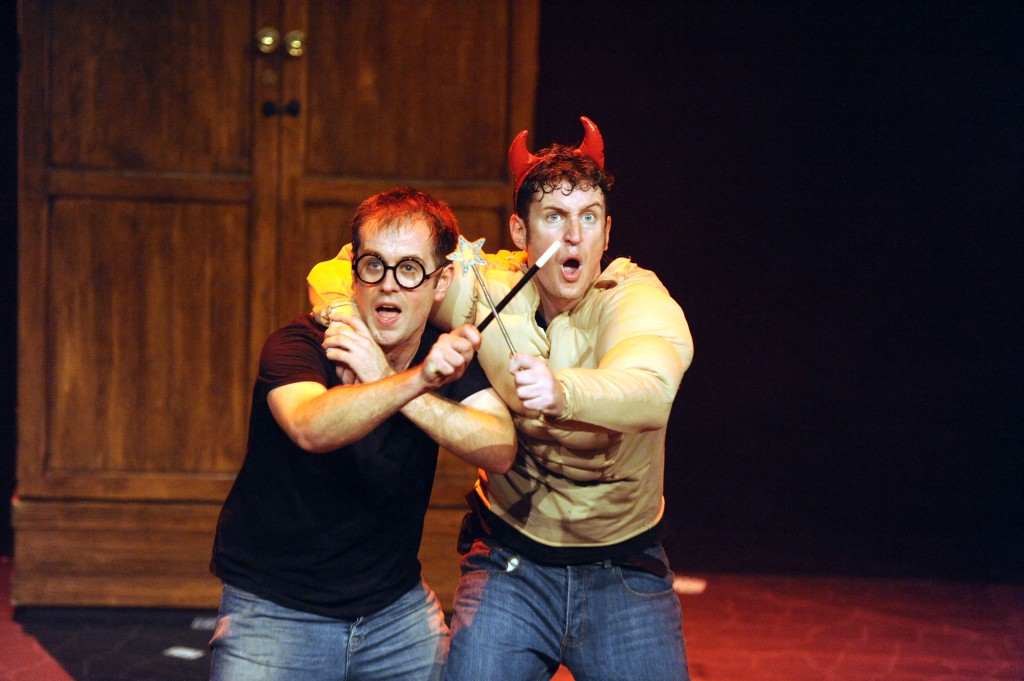 Over a decade ago, former BBC Television hosts Daniel Clarkson and Jefferson Turner condensed the Harry Potter universe into a five-minute street show. A short time later, they expanded the show into the hour long “Potted Potter,” which toured extensively. It last played Chicago in 2012. Its present incarnation summarizes all seven books in a little over seventy minutes.

Truth be told, seventy minutes is plenty of time for actors Joseph Maudsley and James Percy to perform the entire Harry Potter book series (there are three casts performing “Potted Potter”; Clarkson and Turner are on the bill for the previous two weeks of the run). This is due to the cast mostly poking fun at and discussing J.K. Rowling’s work rather than acting out the material. More accurately, “Potted Potter” finds Percy, a serious-minded narrator, attempting to describe various plot points while Maudsley interrupts him with various, often slapstick antics. There is also quite a bit of audience participation including a wicked game of Quidditch played with a beach ball. Maudsley and Percy also prove to be talented ad libbers and are at their best when engaging with the youngest children in the audience.

The show culminates in a lounge-act-style duet between He-Who-Must-Not-Be-Named and the Boy Wizard sung to the tune “I Will Survive.” It’s corny, goofy and, like the entire production, a whole lot of fun. There may very well be a direct relationship between your enjoyment of the original Harry Potter series and this parody. I, for example, consider myself a casual fan and thought it rather good. My twelve-year-old daughter, a Potter fanatic, considered it amazing. Only a true Muggle, though, would walk out without a smile. (Noel Schecter)