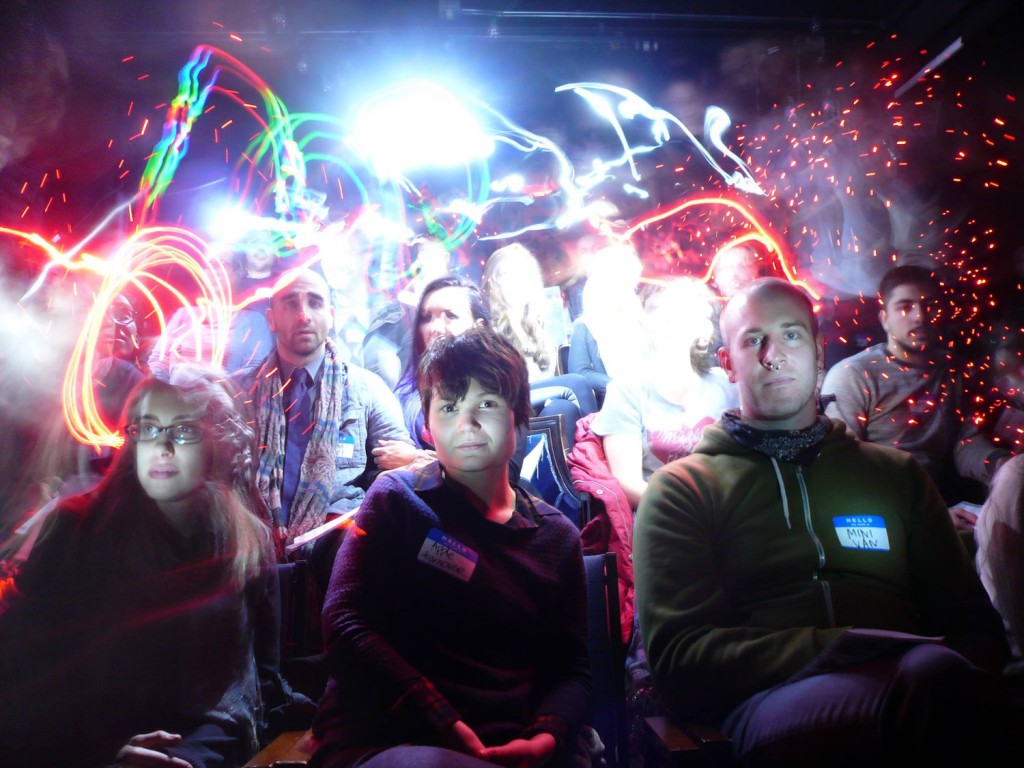 “Too Much Light Makes the Baby Go Blind” was first performed by the Neo-Futurists in Chicago on December 2, 1988. The premise of the show was (and still is) to perform thirty plays in sixty minutes. All plays are written and performed by the ensemble with occasional audience participation. Now in its twenty-seventh year, “Too Much Light” is the longest-running show in the city.

For the past several years, singles and those looking for an alternative to traditional New Year’s Eve celebrations have gathered at the Neo-Futurarium. The cast promptly begins their show at 11pm. Actors and audiences alike end one year and begin another with live theater.

Kirsten Riiber has been an ensemble member with the Neo-Futurists since 2012 and has performed in the New Year’s Eve show for the past two years. “It’s a great alternative to a lot of the other events that happen that night,” Riiber says. “It seems to focus less on getting totally blasted and more on looking forward to a new year and remembering how the last year was.”

Even though the show has been around for almost three decades, it is still able to bring in new audiences and showcase new topics.

“The material is always changing and it’s very reactive to the world at large,” says Riiber. “Because we work as an ensemble, there’s a certain quality that comes out when we put our works up against one another that is pretty unique.”

Ensemble member and artistic director Kurt Chiang loves that the ensemble is made up of a tight knit group of writers, performers and directors who appreciate the creative freedom the company offers. He says that the larger ticket price for the New Year’s Eve show is well worth it. As a fundraiser for the company, audiences not only see the show but also get access to food and drinks (sponsored by Metropolitan Beer) as well as special pre-show performances including on demand poetry from Poems While You Wait.

“[Poems While You Wait will] be set up with all their typewriters in the kitchen and people are going to be able to put their name down and some kind of theme and they’ll have a typewriter written poem by the end of the night, which is kind of romantic, kind of nice,” says Chiang.

Chiang believes it’s also a great way to relieve the social pressures that come along with the holiday, like feeling the need to bring a date or have someone to kiss at midnight, because the performers and audience share something special and no one feels left out.

“When it’s midnight, you’re in a whole room [of people]. Maybe you brought friends but most are probably strangers and the performers absolutely love you because we don’t have a fourth wall and everything we do is for the audience,” says Chiang. “It’s this nice, contained event on a holiday…[a] very social, weird holiday. I think if anyone has anxiety about the holiday, about New Year’s Eve, “Too Much Light” and the Neo-Futurists that night is all contained. We have everything lined up.”

Ida Cuttler has been with the Neo-Futurists for about a year as an ensemble member. She looks at the Neo-Futurists as a way for people to be honest on stage, tell their own stories and move non-traditional theater audiences.

“‘Too Much Light’ incorporates a lot of elements I am drawn to artistically,” says Cuttler. “It’s fast-paced, it has spontaneity and has a focus on what is true and honest. You have all these short plays. Some of them are funny and some of them are serious, some of them are movement and dance.”

This will be Cuttler’s first year performing in the New Year’s Eve show and she’s excited to kick off 2016 with this event.

“It’s kind of like the Chicago theater version of the ball dropping,” says Cuttler. “There are cool alumni who are going to be part of the show. There’s a really great blend of a bunch of us newbies with a bunch of oldbies and that’s always exciting–when you have a different cast together. There’s gonna be dancing! There’s gonna be fun dancing!”

If you’re wondering whether or not this is the best choice for a family-friendly alternative, the answer is a little murky. Topics and performances sometimes contain material that may not appeal to parents (partial nudity, abrasive language, etc.). The show does have a parental advisory that states that kids under the age of fourteen are usually admitted to the theater so long as their parents understand that the Neo-Futurists are not responsible for any lessons the kids take away. As for the performers, they enjoy the more risqué plays and hope they get to perform some of them during this year’s performance.

“I hope someone gets naked, I hope we make a mess,” says Riiber. “We have dozens of plays that fall into that category!”